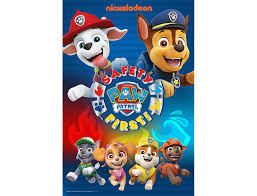 Said Phelps: “I am proud to partner with Nickelodeon and the loveable PAW Patrol pups on the important issue of water safety for kids and parents. I was first introduced to swimming through a water safety program, as my mom was adamant that my sisters and I learn how to swim for safety purposes, and it influenced my decision to establish the Michael Phelps Foundation, which provides water safety instruction through our signature IM program. Teaming up with PAW Patrol and the Michael Phelps Foundation is a natural alignment, and I am looking forward to utilizing this partnership to bring the message of water safety globally to kids and parents in a way that’s easy and fun to digest.”

“PAW Patrol’s indomitable rescue pups go above and beyond to save the day, teaching kids invaluable lessons they can apply to their own lives along the way,” said Charlotte Castillo, Senior Vice President, Global Franchise Planning, Viacom Nickelodeon Consumer Products.  “Through this partnership with Safe Kids Worldwide we continue this mission, while using the power of our global reach to build awareness that we all play an important role when it comes to safety.”

“Safe Kids Worldwide is a go-to resource for families, equipping them with the information and resources they need to protect children from preventable injuries,” said Torine Creppy, president of Safe Kids Worldwide. “We look forward to working with Nickelodeon and Paw Patrol to get life-saving information about water, fire and road safety to families around the world.”

In support of the PAW Patrol Safety First! multiplatform campaign, Phelps and the Michael Phelps Foundation will share swim safety tips utilizing core principals of the Foundation’s programming featuring the PAW Patrol pups.  The PAW Patrol Safety First! The campaign will also co-host a water safety event in the spring of 2020, featuring Phelps and the Michael Phelps Foundation.  Additional on-the-ground safety events will be held in cities around the world, with tentpole events planned in Arizona and New York, as well as internationally, in Mexico. The campaign also includes custom PAW Patrol branded safety guides that feature tips from Safe Kids that educate kids and families about water, fire and road safety.

Nickelodeon has also teamed up with family travel journalists and YouTube bloggers, The Bucket List Family to co-create branded content that will live across the family’s social media channels, as well as Nick Jr. and PAW Patrol social channels.

Nickelodeon is bringing the PAW Patrol Safety First! campaign to life through a partnership with TAILWIND, a brand accelerator group focused on innovating impact marketing for entertainment, fashion, and lifestyle brands.

PAW Patrol was recently renewed for a seventh season on Nickelodeon.  The CGI-animated series, produced by Spin Master Entertainment, follows a pack of heroic rescue pups—Chase, Marshall, Rubble, Skye, Rocky, Zuma, Everest and Tracker—who are led by a tech-savvy boy named Ryder. Together, they work hard to show the people of Adventure Bay that “no job is too big, no pup is too small!” The series features a curriculum that focuses on citizenship, social skills and problem solving.

Nickelodeon, now in its 40th year, is the number-one entertainment brand for kids. It has built a diverse, global business by putting kids first in everything it does. The company includes television programming and production in the United States and around the world, plus consumer products, digital, recreation, books and feature films. For more information or artwork, visit http://www.nickpress.com. Nickelodeon and all related titles, characters and logos are trademarks of Viacom Inc. (NASDAQ: VIA, VIAB).

Kids Worldwide is a nonprofit organization working to protect kids on the road, at home and at play. Preventable injuries are the number one cause of death for children in the United States. Throughout the world, almost one million children die of an injury each year, and almost every one of these tragedies is preventable. Safe Kids works with an extensive network of more than 400 coalitions in the U.S. and with partners in more than 30 countries to reduce traffic injuries, drownings, falls, burns, poisonings and more. Since 1988, Safe Kids has helped reduce the U.S. childhood death rate from unintentional injury by nearly 60 percent. Working together, we can do much more to protect kids. Join our effort at safekids.org.

The Michael Phelps Foundation (MPF) is focused on promoting water safety, healthy living, and the pursuit of dreams, especially for children. Founded in 2008, the Foundation has provided learn-to-swim, healthy living, and goal-setting programming to children and young adults around the world through strategic partnerships with the Boys & Girls Club of America, Special Olympics International, and the Level Field Fund.  For more information, please visit www.michaelphelpsfoundation.org.
Posted by Maureen Jenny Aucone