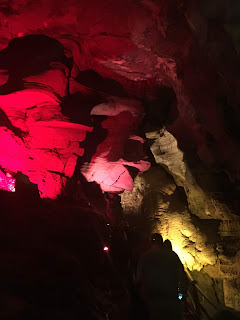 When I was a child I spent every other weekend in the Catskills with my grandparents, and I loved driving down the winding roads, and looking at the beautiful lush green mountains. We use to frequent Drive INN Movies, our favorite restaurant called THE PLACE where we would get root beer floats  and the root beer came in a glass bottle. We would go to Zoom Floom, a water park, Carsin City, a old time Western town, and Howe Caverns.  Most of these places have closed, but Howe Caverns has stood the test of time and is not only still around but THRIVING! I was very nostalgic this summer and decided we had to go back to my old stomping grounds so of course Howes Cavern was on our list of must sees. 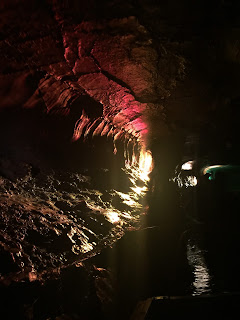 My son is very into rocks. I guess it is a boy thing, or maybe the Jeweler gene for my father and grandfather have passed down to him but he is all about precious stones, mineral formations, mining for gold whatever it is, he is reading about it, talking about it, collecting it. So I thought that he would enjoy traveling underground and walking through a real life cavern- a yea I was right!

Although there is more to do at the caverns these days then just the tour, like rolling around in a giant hamster ball down the mountain, or tower zip lines, rope courses, and an air jumper, which all look great- we only did the tour and the new mining exhibit!

Now they do not just have one tour they have several depending on what you are looking for. There is the adventure tour where you have to crawl through small spaces and travel to the largest room in the cavern, there is a flashlight tour- which is self explanatory, as well as a lantern tour. As I said I was nostalgic so we just did the regular 90 minute tour that I did as a child.  You go into the main building and buy our ticket- and then head in to the first room where they give you a brief history of the caverns, which includes a talking manikin of Mr. Howe himself along with a very high production cartoon. It was a great little way to get familiarized with the awesomeness that awaits.  after that you descend down an elevator (where they pack you in like sardines but don't worry you will be OK.) and go down 153 feet to the beginning of the tour.  When you get off the elevator you are going to realize it is COLD. Yes down there it i a crisp 52 degrees so make sure to wear a sweater. Something that is very welcome in the middle of a heat wave!  We had the cutest tour Guide. I forgot his name but for the purposes of this review we will call him J. ( Hi J, sorry I forgot your name! he had glasses, curly hair and he told us a story about how he fell into the water when he was rowing the boat and it was adorable.!)  He looked young, and was young but boy did he know his stuff. he walked us through the amazing splendor that is Howe Caverns and not only described exactly what we were seeing with an amazing amount of detail but also with enough information that he could answer any questions thrown at him. He also told us about his adventures down in the caves including the previously stated mistake when he feel in, the water. Other than being wet and cold he was fine and everyone had a fun laugh.  I have to say that this is one of those natural wonders that you just have to experience. I cannot describe what it actually felt like to be in the cave other than feeling like it was a profound privilege to be there. It was just so beautiful. I have to say that my favorite part of the tour however was the boat ride on the river. The boats that were brought down in pieces and assembled in the cave. They are steered by the guides who use their hands to guide the boats by pushing and pulling them off of the cave walls. It was reminiscent to that one scene in Will Wonka (you better know what I am talking about) except minus the creepy monologue and images of centerpieces. 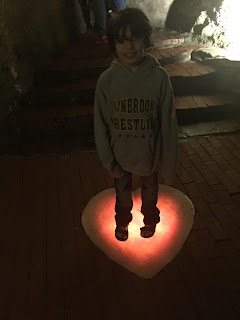 After the tour ends you are brought back up via the elevator to the main lobby of the main building where you can purchase tickets to the other amenities, have lunch at the cafe, or go shopping in the gift store. We chose to eat, so we got one order of chicken fingers and fries, Mike got the lunch special with was Fish and Chips for $5.00! It was huge and we went around  back to eat outside. There is a row of picnic tables that are right by the most amazing view of the mountains, definitely a must stop. After lunch we crossed the parking lot to the mining area. Inside the building they have some crystals and fossils on display for your viewing pleasure and a cashier where you buy a bag of dirt- yes dirt. After you buy the dirt they will give you a gem guide and you are sent back outside where there is running water and a sifter. You pour your dirt into the sifter and then gently place it in the water to reveal hidden gem stones. For a kid like mine who is super into gems this was a big deal! There are also some fossils like shark teeth to be found too if you are really lucky. For $12.00 this was definitely worth the experience.

Even though we didn't experience everything Howes Cavern has to offer, we still spent over four hours there, and had an amazing time. I got the nostalgic experience I was craving and my son experience something truly special for the first time. A must see for everyone go to the offical website to get all the details!