Every heard the term "smart action figure"? No? well get ready because Tomy has come out with a very exciting new franchise called LIGHTSEEKERS that are bringing Smart Action Figures onto the map!

Tomy wants to welcome you to the Planet Tantos where you will discover the almost unknown race Colossi. A world full of magic and mystery this once peaceful world is now been thrown into unbalance! The evil Umbrom are causing trouble and it is up to you and your hero to help save it!
Lightseekers is a game that fits in our digital world while keeping ties with the physical

imaginative play. With multiple ways to play, the first being a base card game… Can I just stop to say how much I love the fact that card games are now cool! I told you all! I really did. ANYWAY- the second way is the app alone-which is available in the App Store, Google Play, and Amazon, then there is the augmented reality feature of the cards that lets you scan the cards into game-play, as well as the most awesome feature of THE SMART ACTION FIGURE!  There are six action figures available right now- we received the adorable Mari Starter Pack (retail &69.99) who is a water element action figure. Her starter back included the hero, two exclusive AR cards, the Aquadart Crab 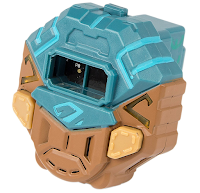 weapon, 3 Ar Combo Cards, and the all-important fusioncore. The figure can be played alone just as you would with any other awesome action figure, but once you insert the Fusioncore, which can be placed on ANY LightSeeker figure, on the back of your figure your toy turns into so much more! Using the bluetooth feature of your phone or tablet our Mari turned into a real life hero talking vibrating changing colors and even warning you when you are walking near danger! Not included in the starter back are the attachable wings (retail $14.99) that let you use your figure as a

CONTROLLER! Which is the epidemy of cool if you are asking me! Dodge or duck, your physical action figure and watch as it happens at the same time on the screen, you can also use the fusioncore  fire blasters at the enemies making your once ordinary toy into a powerful controller.  It is a truly new way to integrate gaming and toys that I am totally enamored with.


The fact that it has so many ways to play also ensures that your child will not get tired of this franchise for a very long time making its replay value off the charts. I cannot recommend this enough great for ages 8-99 Tomy has really hit the mark with this new line and I cannot wait to give one to all the kids in my family and watch the smiles on their faces as they open them up this holiday season!

Email ThisBlogThis!Share to TwitterShare to FacebookShare to Pinterest
Labels: app, Christmas Must Have, Lightseekers, Review, TOMY, Toy to game