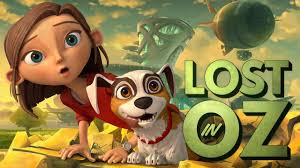 Amazon’s Lost in Oz- WOW. This amazing Amazon Origin “web series” premiers (full season) today, August 4th and the first thing I am going to say is- watch it. I am going to write a full review including background and my own opinion but the short of it is- its Ozsome (get it?). Boy girl, adult or child you are going to love it, so what are you waiting for?
For those of you that are kind enough to still be reading, thank you, and here is the “long of it”. Amazon kids have created a truly unique take on the original Oz series written by Frank Baum, where tween Dorothy Gale gets a ride to Oz when she opens a magical book that she finds underneath her floorboards back in Kansas. Dorothy is thrown green tornado first into a modern-day metropolitan called you guessed it Emerald City with her dog Toto. Not to be down long Dorothy does not wait to try and find her way back and the change of scenery only makes her to the occasion! Lost in OZ take on Dorothy is an intelligent quick-witted girl who knows how to get herself out of some tight situations. A good thing too because challenges are almost immediately thrown at her. 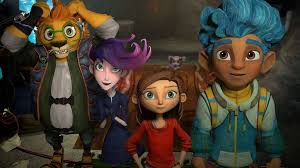 During her stay, she learns that her Mother Evelyn Gale has been to OZ and even has friends there! Evelyn somehow sends a message to her old friend Cyra who then sends her daughter pointedly named West to find Dorothy and the adventure begins! 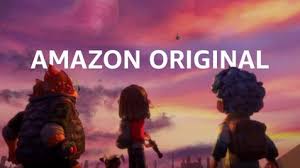 Dorothy Learns that not only does she have a problem but so does Emerald City, who is going through a major magic shortage.  This shortage is not only effecting the city, but also throwing a major problem into her plans to get home. Together with her new friends West the witch and Ojo the over-sized munchkin the threesome decides that the only one who would really help Dorothy would be Glinda the Good Witch.  Sounds easy, right? Wrong! It seems that Glinda has had some trouble of her own and is missing! Boy oh boy it seems that Dorothy and Oz are both in a heap of trouble-but for us it means excellent entertainment! Dorothy and her friends, more of which are picked up among the way are off on an adventure of a lifetime and we are along for the ride!
The shows plot has everything you need for fun filled adventure, but it is the characters and the new modern day OZ that really make it worth watching. Small changes like the yellow brick road being turned into the Yellow Brick Train Line bring this old classic into the modern age along with other small details like the Crystal Ball Cell phone like gadgets used by the teens tweens and in-betweens, a magical nightclub and more bring the OZ of past renditions into a world that is closer to the world our children know and can relate too. Dorothy who is sometimes unpredictable and impulsive with her actions is complemented nicely with her travel mates. West is a witch in training that has something to prove- to herself and the people around her leading her to some troublesome and moral dilemmas. Ojo the over-sized munchkin wants to help everyone, and may even be considered a people pleaser, is fighting not only the bad guys that they encounter but the role of going into the family business instead of striking out on his own. Reigh the lion is a computer geek and conspiracy theorist who helps the gang via remote most times, adds some cautionary tips and trips to the gangs’ plans. The poor scarecrow has lost his memory and is trying to get his mind back to help the others save Glinda and OZ! Add all of this with amazing eye-catching graphics and dialogue that is not only age appropriate but intelligent witty and comical at times and you have the makings of a great show!

We were so honored to have been offered a private screening of the show and although we have not finished it (but will be tonight!) have been enthralled in the world, story and characters. This will be a crowd pleaser and is a must see for anyone promising to keep fans of the land of Oz interesting and bring forth interest to those who have yet to be exposed. Great job Amazon we cannot wait to see where this series takes us!