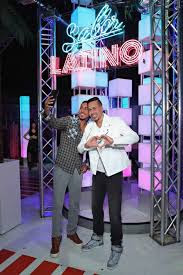 
“King of Bachata” Romeo Santos – whose latest single ‘Imitadora’ has topped the Latin Airplay charts – visited the attraction today to meet his likeness and open the all-new experience ahead of the release of his highly anticipated album “Golden” this Friday July 21—coinciding with his 36th birthday. The Bronx-born native is now immortalized for the very first time by Madame Tussauds following a tireless petitioning campaign over the last several years by his fans, garnering over 7,500 signatures.

“To see myself honored in my home city by Madame Tussauds New York is something that I could never have dreamed for myself,” said Romeo Santos. “To have my own wax figure is a surreal milestone and I cannot thank my fans enough for helping me get here.”

“Sabor Latino is a celebration of Latin music and those who have reached iconic status for achievement in this category,” said Anna Domingo, General Manager of Madame Tussauds New York. “Not only is Romeo Santos the one and only ‘King of Bachata’ but he is a Bronx-born local and a global star, so we are particularly thrilled to immortalize him in his home town of New York City.”

To create the most realistic wax figure, Santos met with Madame Tussauds artists for over two hours taking over 250 detailed measurements and photographs, matching his hair, eye and skin tones and facial expressions. He also donated an original tour costume.