This is an amazing opportunity for you and your family to experience the magic that comes with seeing a Sesame Street LIVE! This great "pop up" show will only be around for one day! So get your shopping shoes on and head over to the mall! You will not regret it! 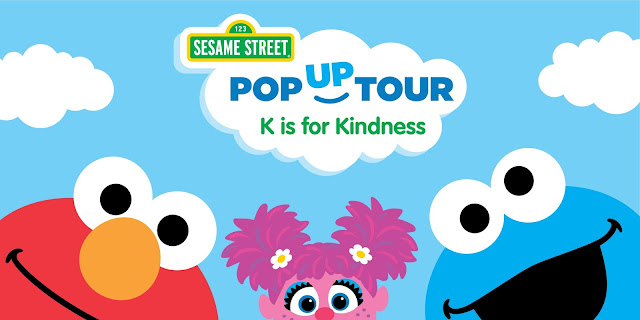 "HBO and Sesame Workshop—in partnership with WNET/WLIW —present the Sesame Street: K is for Kindness Tour, a free, multi-city experiential tour timed to and inspired by the new, 47th season of Sesame Street. Created for preschool fans and their families, this immersive, limited-engagement tour features hands-on digital learning fun, participation from Nassau Library System including bilingual English / Spanish books and activities, “meet and greets” with the costumed characters, a 15-minute interactive live stage show starring walk-around versions of the series’ beloved characters Elmo and Abby Cadabby, and other special surprises!

Sesame Workshop is the nonprofit media and educational organization behind Sesame Street, the pioneering television show that has been reaching and teaching children since 1969. Today, Sesame Workshop is an innovative force for change, with a mission to help kids everywhere grow smarter, stronger, and kinder. They’re active in more than 150 countries, serving vulnerable children through a wide range of media, formal education, and philanthropically-funded social impact programs, each grounded in rigorous research and tailored to the needs and cultures of the communities we serve. For more information, please visit sesameworkshop.org.