Relax with PBS This Thanksgiving break! With Wild Kratts and New Series Splash and Bubbles!

We are already wild about Wild Kratts! So clearly we cannot wait to see the new series Splash and Bubbles which has not only PBS behind it but Jim Henson Company as it's creators. Does it get better than that!


While relaxing with the family this Thanksgiving break, tune in to PBS KIDS for the premiere of the brand new series SPLASH AND BUBBLES, followed by a new WILD KRATTS special “Creatures of the Deep!”. The newest animated series from The Jim Henson Company & PBS KIDS, premiering Wednesday, November 23rd, takes kids on an ocean adventure, filled with humor and engaging storylines geared toward curious young minds. Using groundbreaking Henson Digital Puppetry technology, the series will help children learn marine biology and ocean science concepts while building social-emotional skills. 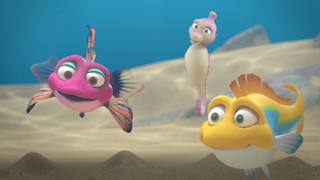 SPLASH AND BUBBLES Premieres November 23, 2016; streaming November 23-January 16 The following three 11-minute stories debut as part of a special premiere event on Wednesday,
November 23, 2016:
“Lu the Explorer” – Splash takes his pals to go see his friend, Lu, a fearless explorer in the deep. He has met Lu in his travels, and she has been an inspiration for Splash. Lu turns out to be a female football fish (the “Lu” stands for “bio-LU-minescent”) who leads them on an adventure in the abyss. “Double Bubbles” – When Finny, a green dragonet, joins the group to play one day, Bubbles starts to worry that they’re so similar, her friends won’t need her around anymore.
“I've Got Rhythm?” – Wave, the octopus, loves the musicality of Reeftown, but tries to keep others from discovering that he has no rhythm.
Additional new episodes premiere throughout the week of Thanksgiving:
“I Only Have Eyespots for You/Double Bubbles” – premieres November 24, 2016 “I Only Have Eyespots for You” – Splash sees a beautiful fish go by and instantly wants to be its friend, but whenever he tries to talk to the fish, it ignores him. He and his friends soon learn the fish has false eyespots on her back and had no idea they were trying to talk to her.
Posted by Maureen Jenny Aucone