"Is Family Game Night part of your regular routine or if you want it to be – we have just the perfect new exciting game!  5-Minute Dungeon is the latest card game that will have families raving - time to move over competition and enter cooperation!

Adrenaline-fueled to create a jolt of excitement for casual and advanced players alike, 5-Minute Dungeon is a game in which players have a short five minutes to conquer a dungeon. Its humor-filled fantasy world is home to creatures like “A Cactus That Wants a Hug,” “The Grime Reaper” and “A Shark With Legs.” In the game, two to five players join together and choose up to five heroes to battle monsters, overcome obstacles, and defeat the dungeon boss.  There are five dungeons to defeat, each more challenging than the last, with the final dungeon requiring precise skill, speed, and strategy to defeat.  With no time to form a carefully-considered plan, and no predicting what dangers lie ahead, communication and teamwork are the name of the game, crucial to surviving the 5-Minute Dungeon. This game seriously provides snack-size entertainment and an opportunity for family fun packed laughs for casual gamers of all ages! 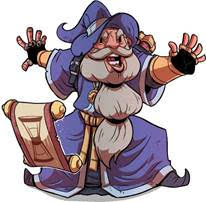 A 5-Minute Dungeon timer app, available for free on both iOS and Android, keeps the action on track as the team attempts to conquer the dungeon in less than five minutes.

For as little as $5, families can be part of the excitement and support a Kickstarter game that the whole family can enjoy.  Check it out here.

Kickstarter pledges begin at $5, as follows:

$5 Contributor level
Thank you & a print-and-play copy of the game.
$15 Early Bird
Get the game for $10 less than anyone else. Only 500 copies available!
$25 Base Game
Includes the game, plus all stretch goals unlocked by the campaign
$35 Collector’s Edition
Features a more stylish box and exclusive game content.
$50 Base Game + Collector’s Edition
Get both versions of the game for only $50. Keep a copy for yourself and give one away, or keep the collector’s edition wrapped up and play the base game.

Two-time Mensa Award winner Wiggles 3D is a Canadian developer and publisher that has been creating board games, apps and syndicated puzzles since 2001. Based in Canada, the company is the creator of the popular magnetic game Bellz and the hit movie trivia game Pass the Popcorn. Their games are licensed in 25 countries and featured in major newspapers and online game portals. Visit www.Wiggles3d.com.
Posted by Maureen Jenny Aucone