MADAME TUSSAUDS GHOSTBUSTERS: DIMENSION is Open And We Have A Discount!


This look absolutely amazing! And now you can go see it and save seven dollars while doing so! We have a special promo code exclusive to The Mommy's Guide readers, so that you can experience the fun and safe! Just put in code  7500 when you are checking out and save $7.00 per ticket! Oh what fun! 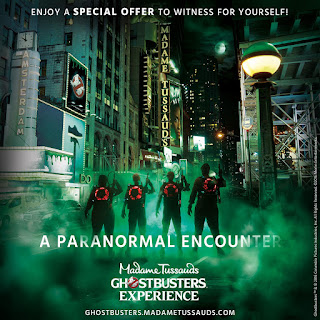 Developed in collaboration with Sony Pictures and THE VOID, the Interactive Experience Inspired by the Highly Anticipated Movie “Ghostbusters” Opens at Madame Tussauds New York on July 1

[NEW YORK, New York, June 30, 2016] – July 1st marks the official opening of the all new Ghostbusters Experience exclusively at Madame Tussauds New York, made possible through a collaboration with Sony Pictures, Ghost Corps and THE VOID.  Created in advance of the highly anticipated movie Ghostbusters, in theaters July 15, the new experience is a fully immersive, authentic and multi-sensory space where guests are not only able to interact with Madame Tussauds’ newest figures, but also enter an authentic physical environment that brings the Ghostbusters story to life with an epic Hyper-Reality finale.


The opening of Ghostbusters Experience marks the next step in an evolution for Madame Tussauds as the attraction launches into a new era of completely immersive entertainment offerings for visitors. Guests will walk through multiple scenes from the new film and then can become actual ghostbusters themselves as they grab proton packs and blast their way through an incredible Hyper-Reality experience, Ghostbusters: Dimension. Designed and created by tech innovators, THE VOID, Ghostbusters: Dimension combines interactive physical environments, real-time effects, and virtual reality to allow guests to step into the movie in a way not even the actors have done.

“This is unchartered territory for Madame Tussauds New York and we are excited to bring this iconic franchise to life for Ghostbusters fans far and wide,” said Eric Fluet, Head of Marketing and Sales at Madame Tussauds New York.  “With the help of Sony Pictures and THE VOID, we are elevating the Madame Tussauds brand to offer not only the amazing figures that we are known for, but a fully immersive experience that will bring the figures and the film to life.”

“The experience at Madame Tussauds New York, combined with Ghostbusters: Dimension from THE VOID, makes this an exciting Ghostbusters destination in Times Square,” said Mark Caplan, Senior Vice President, Sony Pictures Consumer Products.  “It’s not only a great way to get excited about the new movie, but a fun way to get your ghost on in New York.”

“Ghostbusters is an amazing property that has kept fans enthralled for decades, and Madame Tussauds is the perfect one-of-a-kind location. This Hyper Reality (HYPR REALITY) experience will have people talking for years to come. It brings Ghostbusters to life in a way that no one has ever experienced before,” said Ken Bretschneider, Chief Executive Officer and Co-Founder at THE VOID.

Starting July 1st visitors to Madame Tussauds New York will be able to participate in Ghostbusters Experience for themselves. The legendary Times Square attraction, which underwent months of renovations to create this supernatural world, will feature a number of scenes, figures, technologies and authentic props and gadgets which elevate the experience to unparalleled heights:

Visitors to Madame Tussauds New York start their Ghostbusters journey in a New York City subway station haunted by “Sparky,” who terrifies guests through the windows of an oncoming subway car.

As guests proceed through the Alridge Mansion Museum, they feel a ghostly presence coming to life as they pass portraits that follow their every move and end up face-to-face with “Gertrude,” an ill-ridden ghost who spits mock slime all over them, rickety doors, spooky portraits and moving rocking chairs amplify the unknown presence.

Zhou’s Chinese Restaurant serves as Ghostbusters Headquarters where visitors will meet Jillian Holtzmann (portrayed by Kate McKinnon), working on her proton pack, and Patty Tolan (portrayed by Leslie Jones), readying herself for the next spirited brawl.  In the Headquarters, guests will learn about fighting the paranormal and see actual ghosts trapped in a containment unit just feet away from a display case with actual props from the movie.

The experience concludes with an epic finale in the Mercado Lobby, where a Ghostbusters will urge guests to assist Erin Gilbert (portrayed by Kristin Wiig) and Abby Yates (portrayed by Melissa McCarthy) as they fend off “Slimer” and blast away any remaining villains. The hologram of “Slimer,” is seen chasing guests around, anxiously trying to get a selfie with them.

Moving on from the Ghostbusters Experience, guests can ride off in victory on a replica of the Ecto-2 motorcycle complete with a green screen photo opportunity.  Now that they have become Ghostbusters and are feeling fearless, guests will also have the opportunity to upgrade their visit to include Ghostbusters: Dimension, the world’s first ever Hyper-Reality experience. Ghostbusters: Dimension, which will be available exclusively at Madame Tussauds New York, utilizes THE VOID’s proprietary hardware and software to allow guests to step beyond reality and into the world of the Ghostbusters. Offered as an additional experience, teams of three will grab proton packs and suit up for their very own ghost-busting quest, trapping and blasting their way through a New York City apartment.

ABOUT “GHOSTBUSTERS”
Ghostbusters makes its long-awaited return, rebooted with a cast of hilarious new characters.  Thirty years after the beloved original franchise took the world by storm, director Paul Feig brings his fresh take to the supernatural comedy, joined by some of the funniest actors working today – Melissa McCarthy, Kristen Wiig, Kate McKinnon, Leslie Jones, and Chris Hemsworth.  This summer, they’re here to save the world!  The film is produced by Ivan Reitman and Amy Pascal, and written by Katie Dippold & Paul Feig, based on the 1984 film “Ghostbusters,” an Ivan Reitman film, written by Dan Aykroyd and Harold Ramis.  The film will be released in theaters nationwide on July 15, 2016.

ABOUT MADAME TUSSAUDS NEW YORK AND MERLIN ENTERTAINMENTS
Madame Tussauds New York, prominently located in the heart of Times Square, is more than just a wax museum; it is an iconic “must do” New York experience and home of the Ghostbusters Experience and Ghostbusters: Dimension Hyper-Reality Experience. There are no velvet ropes or obtrusive barriers to keep guests from interacting with over 200 of the world’s most recognizable and influential icons. The fully immersive, one-of-a-kind attraction is great for families and visitors of any age. With particular dedication to regional visitors, local admissions offers are available. Visit www.madametussauds.com/newyork or call (866) 841-3505 for more information.

Visit www.ghostbusters.madametussauds.com for more information about Ghostbusters Experience. To join in the conversation and follow the latest updates, be sure to use #GBXP across all social media platforms.
Posted by Maureen Jenny Aucone