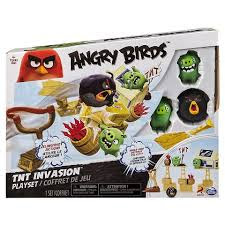 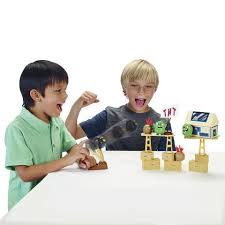 Unless you have lived underneath a rock you have heard of a little thing called Angry Birds.   What started out as a app has turned into a phenomenon- its most recent move, a movie
movie! Spin Master has come out with a line of great games with the characters of the movie doing what they do best- being flung into the air and defeating those evil Piggies!   With the TNT Invasion Game play as your favorite explosive Angry Bird- Bomb while he tries to take down the Piggies invasion of their wonderful Island.  The set comes with Bomb, two Pigs, six boxes of TNT two planks three ladders, one little piggie house (see what I did there) two barrels and one TNT sign as well as a sling shot.  Set up the pieces any which way you want, and then send Bomb soaring through the air and destroy it over and over again. Honestly this never gets old.  It’s kind of like Jenga but instead of trying not to knock it down your goal is to knock it down, and honestly isn’t that the best part? What kid doesn’t like setting up a whole row of blocks only to stomp smash and destroy them- I know I love it.  The set comes with enough pieces that you never have to set it up the same way twice if you do not want to. Your kids will love challenging themselves by building the ultimate set and seeing how many times it takes to completely demolish it. I myself find a certain satisfaction when I finally get the
blocks all tumbling down.  All in all, a simple game that everyone in the family will love. Perfect for the whole family (you will even find the cats entertained by it) it’s a great way to have the angry bird experience without the screen!

*We were given this game for review- however all opinions are our own! Our Opinions CANNOT be bought
Posted by Maureen Jenny Aucone