Master aerial stunts and tricks that defy gravity with the Air Hogs 360 Hoverblade! Toss it into the air and be amazed by its 360-degree boomerang action! You’re in complete control — twist, turn, hover and soar! Use the throttle control to fly your 360 Hoverblade indoors and outdoors. With a durable foam-body and easy-to-fly design, the 360 Hoverblade is ready for all the twisting boomerang action you can throw at it. 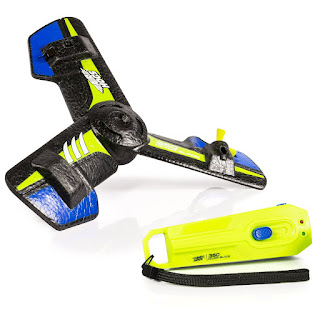 Air Hogs 360 Hoverblade: Holy coolness Batman- The Air Hogs 360 Hoverbalde is literally one of the coolest things I have played with recently.  Take this bad boy out of the box, place 4 AA batteries into the remote and charge the Hoverblade via charge port and connector. All set, OK turn it on and throw that baby in the air and prepare to be WOWED!  Yea I mean it throw it in the air! Now using the remote control speed, turn it about and let it fly! Used both indoors (where you cannot break anything) or outside in an area that has little to no trees, you can fly this baby seamlessly. Learn tricks, like making it hover mid air (harder than it sounds but super fun) twisting or turning it around with a flick of the finger.  The more you practice the more you will be in control, and complicated moves you can master with it. Absolutely fantastic for beginners in the aerial arena, but also fun for true pros both will have no problem having fun with this amazing and innovative toy.


From our intense reach the range of distance between the remote and Hoverblade is about 20 to thirty feet, just make sure you keep the remote pointed directly to the machine- sunlight can also affect the device so it is great with a bit of cloud coverage.    I wouldn’t call either one of these problems just gets some getting used to for the newbies.  The battery life is 2 hours plus, we have made it to almost three which is pretty fantastic when you think about what this toy actually does- ya know flying and all. The Styrofoam material is light but incredibly durable meaning if you make a hard landing here or there it will not break- just do not make a routine of it.

I love the fact that it can literally take off anywhere, including your fingertip, and you do not have to worry about hurting yourself, or others as it just kind of soars straight up into the air.  The Hoverblade is such a great mix of outdoor play and technology that I can hardly stand it! The fact that it takes practice to master tricks makes it a challenge that no kid can not take on, and keeps them interested even after dozens of use. Our family has been playing with it at least once a day since we received it and have yet to get bored. During a play date it is also great because friends-of the kids and the adults- are both fasinated with it on sight! Best of all there is no clean up- man have I loved having X's friends over since we received it! The replay value is unlimited which juts goes to show what a great product it is, and if that doesn't sell you on it then the the price tag will- this baby is only thirty dollars. My goodness it is worth the investment.

It is rare to find something that appeals to everyone, but I think we have found it in The Air Hogs Hoverblade 360, it is simple enough that anyone can use it while keeping you on your toes as you master flying it through the air. Everyone will want a turn, and no one will mind going outside to play when they have this bad boy at their side. Thanks so much to Spin Master for sending this over we love it!

* As always we have been given this item for review- however all opinions
are our own. If we do not like it we do not write about it! That is our PROMISE to you! We will not be bought into a review!
Posted by Maureen Jenny Aucone