We LOVED the first series, and just cannot wait to see where TellTale brings us in this series. I love the fact that they are creating the same amazing gaming experience for kids! -MJ 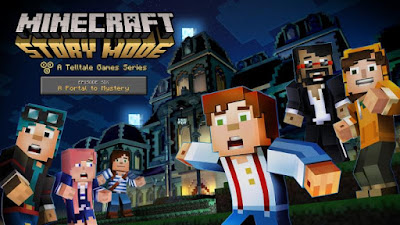 The first episode in an add-on series of three new adventures, Episode 6: 'A Portal to Mystery' will be available digitally worldwide starting Tuesday June 7th on PC and Mac from the Telltale Online Store, Steam, and other digital distribution services, on the PlayStation®Network for PlayStation 4 and PlayStation 3, on the Xbox Games Store for Xbox One® and Xbox 360®, for compatible iOS devices via the App Store, and for compatible Android-based devices via Google Play and the Amazon Appstore. The episode will also be coming to the Windows Store.

This episode may be purchased digitally as part of the new Adventure Pass for $14.99 USD or equivalent, which includes access to Episodes 6, 7, and 8 as they release. The episode will also be available individually for $4.99 USD or equivalent. Players will need to own at least Episode 1 in the series, or the season pass disc, in order to purchase Episodes 6, 7, and 8.

Several special guest stars from the Minecraft community join the cast in this new episode, all 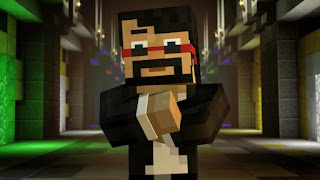 playing characters from their own YouTube videos. Players will get to interact with Joseph Garrett as Stampy Cat, Stacy Hinojosa as Stacy Plays, Dan Middleton as DanTDM (The Diamond Minecart), Lizzie Dwyer as LDShadowLady, and Jordan Maron as CaptainSparklez.

In Episode 6: 'A Portal to Mystery', continuing their journey through the portal hallway, Jesse and crew land themselves in another strange new world - one completely overrun by zombies. With a timely invitation to take refuge in a spooky mansion, they find themselves thrown into a thrilling mystery alongside famous members of the Minecraft community.

Minecraft: Story Mode - A Telltale Games Series - Episode 6: 'A Portal to Mystery' is rated 'E10+' (Everyone 10+) for Fantasy Violence by the ESRB. Future content in the season is yet to be rated by the ESRB. The series is published by Telltale Games in partnership with Mojang.

Telltale is a leading and award-winning independent developer and publisher of games for every major interactive platform from home consoles and PC to mobile and tablet devices, and is the pioneer of the episodic delivery of digital gaming content. By successfully developing games as an episodic series and frequently releasing in the format of a game season, they create longer consumer engagement than traditional games for each release. Founded in 2004 by games industry veterans with decades of experience, Telltale has quickly become an industry leader with numerous honors and awards from the Academy of Interactive Arts and Sciences, BAFTA, SXSW, the IMGA, and more, as well as being named Studio of the Year across multiple years. Telltale's reputation for quality has been established across more than two dozen different product releases over the years with recognition and acclaim from publications like IGN, The New York Times, and Variety, including over 100 "Game of the Year" awards from publications like USA Today, Yahoo! Games, Wired, Spike TV VGAs, E!, Official Xbox Magazine, The Telegraph, Metacritic, and more.  Telltale is a fully licensed third party publisher on consoles from Microsoft, Sony, and Nintendo, and also publishes games on the PC, Mac, iOS, and Android-based platforms. For more information visit www.telltalegames.com.