Talking Ginger is Celebrating His Birthday!

Talking Ginger is celebrating his birthday today and we want you to be apart of the fun! 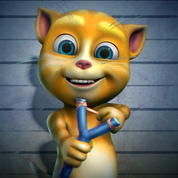 Talking Ginger is a part of the hit web-series- Talking Tom and Friends, which has it's own youtube channel and is well worth a watch!
TALKING GINGER is the cutest, most mischievous orange kitten you’ll ever meet.  Mommy's Guide Fact: Orange cats are almost 100 percent male, and happen to be real really curious and have tons of personality- I have found this out by owning quite a few, and loving them all!  Talking Ginger is played by  the multi-talented Maria Bamford who grew up in Minnesota, but now calls Los 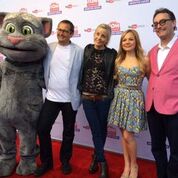 Angeles home. She is a comedian and animation voice-overachiever known for her quirky style and vocal impressions. She is also a well-known voice actress for animated series like "Adventure Time,”  (love it) “Word Girl,” (love it)  “Kung Fu Panda: Legends of Awesomeness,” (LOVE LOVE LOVE IT) and as mentioned Outfit7’s hit YouTube series “Talking Tom and Friends:  The Animated Series.”  You can find Ginger causing a ruckus each week on the Talking Tom and Friends YouTube channel.  I cannot wait to see how you brings Talking Ginger to life!


"Based on the entertainment phenomenon that has achieved over 3.5 mobile downloads for its suite of apps, and three billion views on YouTube, the animated series chronicles the adventures, hijinks, and inventions of Talking Tom and the gang as they shoot their own reality television show.

Fans just can’t get enough of Ginger’s adorable antics via interactive videos and cute pictures on social media. He also appears in his own app, Talking Ginger, and guest stars in several other apps in the Talking Tom and Friends series.

Ginger celebrates his birthday on April 8th.  Maria took a break from squawking into a mic to tell us about playing Ginger on The Animated Series.


Q:  What does Ginger do on his birthday?
A:  He loves to do anything with his friends (who have candy.)

Q:  What’s your favorite thing to do on your birthday?
A:  I'm more of a hot fudge sundae lady – go Fosters Freeze!

Q:  We see that practical jokes are a part of Ginger’s every day routine.  Do you like to play practical jokes, and if so, what’s the best one you’ve ever played?
A:  I'm very gullible and I will walk into a banana cream pie without hesitation, if asked.

Q:  How old is Ginger?
A:  He is 6 years old. I am 45, but have not changed discernibly since infancy on an emotional level.

Q:  As a kid, did you ever envision you’d do voice overs?
A:  I did voices but it I didn't think it was a job possibility. I was terrified after high school ended.

Q:  You are one of the busiest people in animation.  What else are you doing these days?
A:   “The Adventures of Puss in Boots” on Netflix, “Adventure Time” on Cartoon Network, “Pig Goat Banana Cricket” on Nickelodeon, and of course “Talking Tom and Friends: The Animated Series” for Outfit7 on YouTube and YouTube Kids App..and constantly auditioning for more.

Q:  What would you like to see Ginger do in his next app release?
A:  Give up sugar!

Q:  Are you a dog or cat person?
A:  I love them both a little old and overweight.

Q: What’s it like to play a boy character?  Do you think you’d play Ginger differently if he was a girl?
A:  Gender is very fluid in society today and certain "traits" identified as male or female can be limiting to people - when you feel like you have to choose one over the other. I mean our dogs Bert (boy) loves romance novels, and Betty (girl) is a karate aficionado. So, I guess my l answer is maybe. Depends.

Next on the horizon for Bamford is her Netflix Original Series “Lady Dynamite” which premieres May 20, 2016. The series draws inspiration from Bamford’s life and tells the story of a woman who loses — and then finds — her s---t. Guest stars include many of Bamford’s friends, such as Patton Oswalt, Ana Gasteyer, Sarah Silverman, Jenny Slate, June Diane Raphael, Adam Pally, Tig Notaro, Mira Sorino, Brandon Routh and Dean Cain.