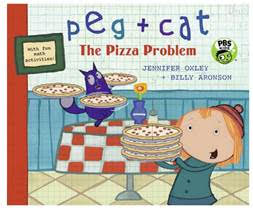 It’s going to be totally awesome!

Peg+ Cat along with all the programming that come from the Fred Rogers (Mr.Rogers) Company are not only amazing, but the best programming available for your child hands down.  Peg + Cat host these wonderful events for free for the kids, and it is something super special and not to be missed! Check out the details below we hope to see you there!

' "To celebrate the release of “Peg + Cat: The Pizza Problem,” the latest installment in the popular Peg + Cat book series from Candlewick, kids and families can join Peg, Cat and authors and series creators, Jennifer Oxley and Billy Aronson, for a very special – and musical – Sunday Story Time at Powerhouse on 8th in Brooklyn on February 21! In addition to a special book reading, attending kids will be treated to an amaaaaazing ukulele sing-along! It all adds up to a super fun day!

Below is more info about the book and the multiple Emmy Award-winning PBS KIDS TV series from The Fred Rogers Company as well as a link to more details on the upcoming event.

For more information and to RSVP to the event, visit:
http://powerhouseon8th.com/events/sunday-story-time-with-jennifer-oxley-and-billy-aroson-creators-of-peg-cat/


More about “Peg + Cat: The Pizza Problem”
It’s opening day for Peg’s Pizza Place! Peg and Cat are excited to take their first order—from the Teens!—only to learn that some of their customers want a whole pizza while one of them wants half a pie. How can Peg and Cat make half a pie when they don’t know what half is? Luckily, Ramone and Mac are there to help, with a slice up the middle of the pie. As more customers come in, things get entertaining, with Peg singing a jazzy song and Cat doing a dance. But soon there’s another problem: four orders, but only two and a half pizzas left. Peg is totally freaking out—until Cat reminds her that when it comes to halves and wholes, it’s all in how you slice it.

More about Peg + Cat
Peg + Cat, produced by The Fred Rogers Company, launched on PBS KIDS in fall 2013. Proving an instant hit with children, parents and critics alike, the series went on to win four Emmy Awards, including most recently a 2015 Emmy for “Outstanding Writing in a Preschool Animated Program.” The series follows the spirited Peg, Cat and their friends as they embark on relatable and funny adventures, filled with upbeat original music, and work together to overcome a challenge using their trusty math and problem" '
Posted by Maureen Jenny Aucone