Sklyanders Partner Together With Kid Cuisine for a SuperCharged Lunch!


*** When I was a kid, my mom would get us Kid Cuisine, and it was like this amazing treat. I loved the sectioned off plates, and the fact that the dessert was right there in front of you- none of that pesky waiting. I think this is an awesome idea, As you guys are well aware we are a Skylanders household- in fact we have been stuck in the house because of Jonas playing SuperChargers all weekend long! I cannot wait to go shopping, the first thing on my list will be the Mac & Cheese. It looks awesome! 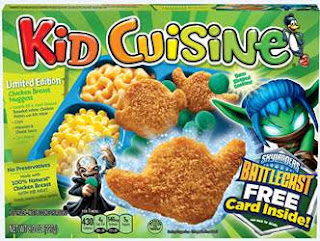 Activision Publishing, Inc. and ConAgra Foods' Kid Cuisine have teamed up to bring even more fun to frozen-food grocery aisles. Available now through April 15, kids everywhere in North America can enjoy a variety of Kid Cuisine meals inspired by Skylanders®, the pioneers of the toys-to-life category, giving fans all the more reason to play with their food. The promotional meals will be available at all participating major grocery stores and supermarkets across the country, as well as Walmart and Target.


The Skylanders-inspired Kid Cuisine meals will infuse the magic that the blockbuster franchise is known for with this novel partnership. Fans will enjoy meals featuring their favorite characters such as Stealth Elf and Kaos shaped chicken nuggets with gem-shaped cookies, and Spyro and Dream Catcher-shaped macaroni with pudding that changes color while you eat! Fans will be able to get their hands (and mouths) on nine different Skylanders-themed Kid Cuisine meals: 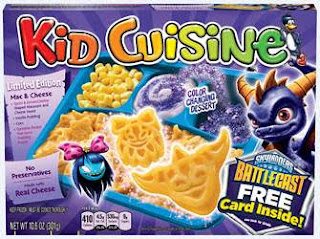 What’s more, fans will get an extra treat inside each Skylanders Kid Cuisine meal box; a free Stealth Elf Skylanders Battlecast card. Skylanders Battlecast brings cards to life in a new free-to-play mobile adventure, set within the Skylanders universe. The game offers everything from collectability to strategic card combat, online PvP and an exciting single-player campaign, appealing to both Skylanders fans and classic card battle enthusiasts. Skylanders Battlecast lets players create a team of their favorite heroes and build the ultimate deck for battle.  Portal Masters won’t want to miss out on this opportunity to continue to build their ultimate deck of cards on their quest to become a legendary Battlecaster in anticipation of the game’s official launch in 2016.
Posted by Maureen Jenny Aucone