Pete The Cat has become a phenomenon in the book world- so it only makes sense that a board game under the same title would be just as awesome!  Pete The Cat the Groovy Button Game is an amazing game aimed towards the little kids, and has no reading required! 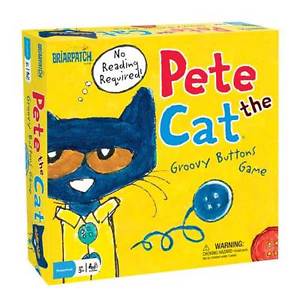 The game includes 40 buttons, 4 button jar boards, Game Board with a spinner! 4 Pete the Cat
pieces that move about the board, and the instructions!  The game play is simple, each player gets a Pete the Cat figure to move around the board, one Jar, and two buttons.  The youngest goes first, as the eldest child I always hated this rule, but whatever this isn’t about me.  Each player spins, move their Pete character the amount of numbers the spinner has landed on and lands on one of several colored spaces that are all over the board.  The Green button has a number on it, the player who lands on it picks up the amount of buttons stated from the pile and puts them on their jar!  The Red space has the player remove the number or buttons stated on that space.  The blue button lets the player trade their jar with any other player on the board! Then there is the elusive Path to Pete’s Shirt choice.  The player may take a trip over to Pete and if they land on Pete they get to take all of the buttons that are sitting on Pete’s Shirt! Poor Pete how will he ever get his shirt closed!  When all the buttons have been taken from the button pile the game is over and the player with the largest amount of buttons wins!

What a great way to introduce your child to the world of board games. The board, and all the pieces are designed just like the illustrations of the book. The game play is easy enough to grasp, yet challenging enough for the little ones to stay interested. They get to use their counting skills, interact with a character they love, and learn how to not only win- but lose as well! Something that every child no matter how young needs to learn!


There is nothing lacking in the quality of the game- which will stand up to the test of time. The pieces are sturdy and big enough for little ones’ grips, and even survive several cat attacks.  Cats are notorious haters of board games, even ones that have one of their own on them. A great gift for any fan and a great introduction to the gaming world. I see no better way to spend a great game night with my kids then Pete the Cat’s Groovy Buttons Game!

Reviewed and Edited By Michael Aucone