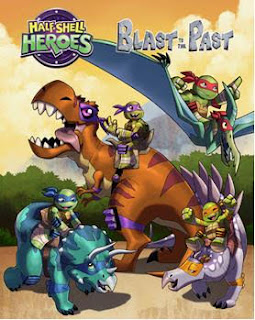 The Teenage Mutant Ninja Turtles find themselves on the adventure of a lifetime when they
accidentally time travel back to the Jurassic Era in Half-Shell Heroes: Blast to the Past premiering Sunday, Nov. 22, at 11:00 a.m. (ET/PT) on Nickelodeon.  During the 2D-animated one-hour special, the Turtles encounter friendly dinosaurs from the past and dangerous aliens from the future who have a nefarious plan of their own. Using their ninja skills and having some fun along the way, the four brothers must find a way to save the day and get back to home.

Starting Nov. 1, Half-Shell Heroes: Blast to the Past will be available on Nick.com and the Emmy Award-winning Nick App, along with platforms including iTunes, Amazon, Xbox, Google Play, Vudu, PlayStation and VOD.

Turtle fans can experience even more dinosaurs with the new Random House book “Half-Shell Heroes: Blast to the Past,” which follows the same storyline available now. Additionally, Playmates will release new dino-themed toys this fall to add to the popular Half-Shell Heroes line.

Season four of Nickelodeon’s Teenage Mutant Ninja Turtles launched Sunday, Oct. 25, at 11:00a.m. (ET/PT) and continues to premiere new episodes Sundays at 11:00 a.m. (ET/PT). During the 26-episode season, the half-shell heroes will embark on their most epic adventure yet – outer space! The Turtles, joined by a cyborg known as Fugitoid, hurdle though space meeting strange and bizarre alien creatures and combat galactic monsters all in a race against time to save planet Earth.

Email ThisBlogThis!Share to TwitterShare to FacebookShare to Pinterest
Labels: Blast from the Past, Dinosaurs, Heroes on The half Shell, TMNT