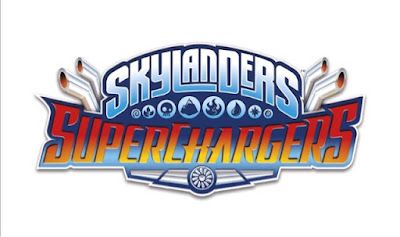 Hello Portal Masters! The reviews are in, and Skylanders SuperChargers is THE Game to have this holiday season! Yes, it is true, I have spent the past few weeks secretly playing this game while my family slept. I know my life is hard, and I have to say that out of all the toy to games out there that I have played, this is the best one by far.
Every year the Skylanders brand grows in both graphics and concept, however after last year' Trap Team game I really thought the brand had peaked.  I loved that game, and loved trapping the villains in the crystal shards and watching them pout inside my Wii U Console. It was great and I had no idea how they were going to top it. Well SuperChargers now reigns supreme in the franchise. Yeah adding super cool vehicles is a great way to revamp a series. However as we have seen over and over again, Skylanders doesn't just revamp a game, they revitalize it.  The Skylanders will never be the same now that they can roll on through in three different t
ypes of vehicles. However I get ahead of myself, let's get down to the basics.
Kaos is returning as our favorite Super Villain but instead of trying to take over Skyland, we see that he has already succeeded!  It is our task to save Skyland from his evil mites and back into the hands of the honest citizens of Skyland. This is the first time we see that Kaos has already won, and he is just a little smug about it to say the least.  Do not fret my pets, we will absolutely be getting our beloved Skyland back but with some help from some of our old friends along with some new.
The game-play is divided half and half between vehicle and character game play, but don't worry, this new game still holds dear all of the fans' old favorite options- like playing past console characters (with all their upgraded goodness) on the new game while saving upgrades onto the toy itself. 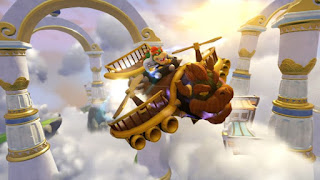 There are some very cool, very snazzy new upgrades like the vehicles themselves, which will have real life playing ability just like the figures.   As with the characters there will be different cars for different areas of the game: those that fly through the air, through water and on the ground. Each vehicle will handle differently depending on the surface they are working with as well as what upgrades and modes they receive.  The character you place in the vehicle will also have an effect,  giving them the Supercharger feature that is named in the title. It all depends on the character and car combination, similar to the character combos from Swap Force, but you can look forward to fun boosters and powers. You can place any character with any figure, however only Supercharger characters can upgrade and modify your new ride, and guys you are going to want to modify that ride.


Each vehicle has you balancing the weight, power, or the stamina of the vehicle, making you have to work for that upgrade in a very detailed way.  When you finally reach the perfect combination, it is more than satisfying. I loved the way that they put forth the effort of programming such a detailed upgrade system. It would of been way easier to just do generic upgrades for the vehicles, however the franchise is never generic and puts forth the effort to make sure that your gaming experience is not only personalized, but fun as well.


The boards have even more gameplay value, adding hidden areas within the bonus areas of the game.  For instance if you are using the submarine during a water vehicle side-mission, you can dive under the water to reveal hidden areas that other vehicles cannot get too.  The modes and upgrades you get during these side missions are also random, giving your game even higher replay value because you can go back and re-do missions to get different upgrades.
Another difference is that you can now upgrade your vehicle in real time, as well as in the upgrade mode.  So if you get a upgrade you can put it on your car right then and there instead of having to wait.

Game play remained the same in all other fashions except in three areas. The first is that there is only one playable vehicle at a time. Player two will be put in a helper setting that can stop villains and collect items.  The second is there are no more elemental areas in the game.  Yes the kids may be upset about this, but it's ok. In its place are racing boards that you will need to use a certain elemental vehicle to really beat the board completely, as well as get to the secret areas that we discussed before. Third is the online racing game play-available only on the Wii U or 3ds consoles. Oh yeah baby, yet another reason to work through the boards and replay for upgrades because you can go online and race other competitors in this amazing Mario Kart style arena.  Need another reason to buy the game for Nintendo?  Well what about the amazing amiibo-Skylander crossover character of Bowser and Donkey Kong?  Bowser goes with the 3ds version starter pack, and Donkey Kong on the Wii U.  Yeah that happened, and they work flawlessly as both Skylanders and regular amiibos. LOVE IT!
The game itself is also a bit faster in the pace area- which is to be expected since they are now fooling around in new wheels. The toys are still incredibly detailed, and some old characters come back to life in this new addition, including a brand spanking new Stealth Elf (my favorite) who is all amped up and ready for a new challenge.
One more cool feature that I must mention is the way the traps will be featured in this new edition.  Although not a huge part of the game, the traps will be able to interact with the newest edition in the franchise in a minimal but fun way.  Use your trap team crystals with a Villain inside during the game for extra cards for the mini games, and boosters for your cards and characters.

So what do I think?  I think every Skylander fan both young and old will absolutely love this new game.  The graphics look amazing on both the big screen and the Wii U Game Pad alike.  The vehicles breathe new life into the franchise without losing the core of what we all love about the game. The characters and story line are just as entertaining as ever, and the agonizing extras that come in the game, make this a very special addition to the franchise.