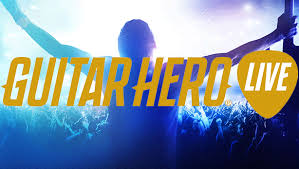 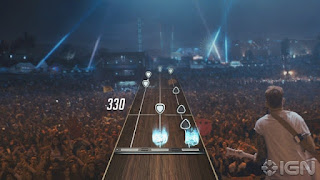 Guitar Hero is back, and wants to know if you guys are ready to rock! This all new version of the game that took the world by storm years ago is revamped and ready for you...to get on stage!  First let us start with the game's new look. In the older versions the game was cartoon-ized, and had very little in the way of visual aesthetics.  However, this time around you play with a first person view and see through the eyes of your virtual character.  You experience first-hand as they walk behind the scenes and up onto the stage to a sea of live actors playing as your fans, and your band mates, giving you a true sense of actually playing in a real live rock band.  It is a crazy experience the first time you play it.  It's more like interacting with a TV show than video game and will absolutely blow you away.  Do not get too comfortable up there though.  The excited crowd and pumped up crew members, although cheering whilst you walk upon, the stage can just as
easily turn on you if you’re playing turns for the worse.  Have an excellent set and you will find the crowd holding up signs of love and singing along to the lyrics, and your band members will give you a thumbs up, a smile or a wink of encouragement.  Disappoint them by playing poorly however and the tides will turn.  Crowds will boo you and hold up signs saying that you suck or to go home.  Their faces will send chills down your spine with their looks of mock disappointment.  Your band will likewise turn on you, and it is amazing how much those actors get into your head!  Yes, there was pressure in the games before, but now NOW you actually have real faces looking at you judgingly, waiting for you to step up your game.  It is kind of awesome. 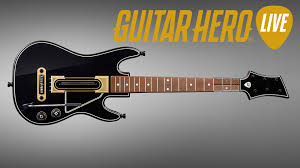 The graphics are not the only things that have changed however--the guitar itself is practically a masterpiece.   The frets of the guitar are now split into two rows, three black buttons and three white, and an addition of a sixth button where the old one had only five.  It takes a lot of time and a lot of practice to actually get use to the new setup, especially for veteran players. No need to fear though, us gamers do like a challenge.  Oh and if you're not up to a challenge there is a setting change that lets you play only one set as well. A great way to ease yourself back into a game you may not have played in a long while.  Once you are back to the groove, change the setting to the two rows of frets, and get your game ON!

The game play is a lot like your other versions where you go through the career mode in order to unlock new songs.  However this time you are unlocking those songs with different groups. You may be in a Punk Band, Metal, or otherwise. Your bands' outfits, attitudes, and the attitudes of the crowd will reflect what genre of music you are playing, along with the set list.  This is not your only method of play.  In a tribute to the olden days when MTV actually played music, Activsion has created GHTV- or Guitar Hero Television.  This always streaming channel plays blocks of music hourly with different genres of music, all day every day. From Classic rock, to 90’s Alternative, you can look at the schedule and plan your day accordingly.  Hop into the song mid-stream or start at the very beginning.  It does not matter--play along as the music video as the song plays in the background and win coins for every completed song.  You can use those coins later to rent songs out of the library that is also available online.  Other nifty extras that happen online are that you can change into two player mode, hook up a mic to sing along to the songs (which I love to my family's, and my cats' dismay) and online playing availability where you can play with other local GH players.

So what do we think?  WE think that after playing for twenty hours in a two-week period that this game freggin rocks. We missed playing this title for so long that we were more than psyched that a new version was coming out.  All the upgrades are really amazing, and we can only see big things being added to the game in the months to come.   I am so thankful for Nintendo who let us play the game at their headquarters, and to Activision who sent us over a copy so we could get our rock on! Although we received this item for free, all opinions are our own, and we highly suggest that you put this baby on under your tree this holiday season! Rock on guys, Rock on!
Posted by Maureen Jenny Aucone