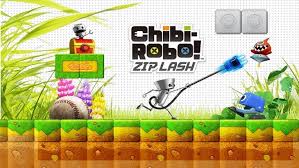 Chibi-Robo- anyone remember this guy?  This was the Wall-E of Nintendo games before Wall-E existed, a robot that helped clean the human world and did it with a smile in his eyes (because he has no mouth).  Although he may seem new to Nintendo fans, Chibi-Robo has been around for a while.  He first appeared on the Game Cube for his Plug Into Adventure Game.  The Game Cube version was a fun, kinda of dark game and the DS games that followed were also on my must play list.  Although the character did not make its mark in the gaming world like other Nintendo fan favorites,Chibi-Robo has a strong following none the less that includes myself.   When I heard that the game was going to be redone for the Nintendo 3DSXL I was really excited to see what Nintendo had in store for his newest adventure, Zip-Lash. 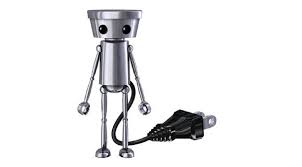 Chibi-Robo is still as adorable as ever, I mean really, he may be one of the most adorable characters ever in my mind, and although he stayed the same, the game itself has changed from semi-sandbox game play to a side-scrolling platform program.  This game is more along the lines of Mario and Kirbi games which any Nintendo fan will know and instantly love.  The left to right game play has you moving Chibi-Robo throughout the boards in order to help earth get rid of its most recent alien nuisance.


Although cuteness is not a super power- what Chibi-Robo does have is some wicked moves with his plug.  This takes Zip-Lash from a generic platform to a more challenging and engaging sort of game play that will have you seriously addicted.  Throughout the game you will add measurements to the cord so that you can reach farther and farther with each increasement.  Use the cord to fly up, open up secret areas, grab coins and destroy enemies.  This kind of game play tool is something I have yet to see on the 3DS console as a primary tool.  It can be frustrating at times, however my five-year-oldson had no trouble getting me out of my most annoying predicaments.  In fact the way he figured out how to get into some areas by hitting the cord on surfaces in the exact right order really impressed me.  You really have to think out of the box during some parts, and the kiddos definitely are on board with that. 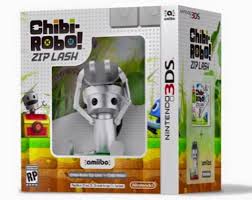 There are six worlds in all that you have to defend from the aliens, but the way you go from level to level is also vastly different from other platform games.  Instead of moving from one stage to the next, at the end of each board you use your Zip line plug to hit one of three UFOs.  Each one then gives you one to three spins of the Destination Wheel.  Depending on the number that you land on, is how many levels you move in the world.  So if I hit one, I move up one board.  But if I hit three, well then I skip the next two boards and go on to the third.  You may even have to play a board over before getting to a new level to beat.  Yeah, that happens.  It actually threw me off in the beginning, being the old lady that I am.  I did not understand how I could NOT GO TO THE NEXT LEVEL,  however my son thought it was a hoot and a half.  For my OCD mind there was a way to ease the pain though—when  you beat the world you can go back into the  levels and get all the goods you missed the first time around.  With a second try around you are able to collect all the coins,  unlock all the secret areas as well as the candy snacks (although I am not so sure why Chibi-Robo never gets any) and complete each level within the world to a nice 100 percent. The game play never gets old either, especially with the addition of harder and harder puzzles.  There is also the inclusion of vehicle play so there are always new challenges to get through, even if the bosses are not that hard to defeat. 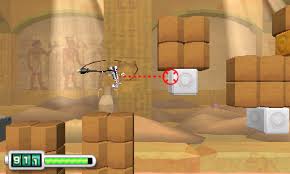 The world you play in is supersized compared to the pint sized robot, and offers a variety of colors and detail that immerse you into the world.  Adding the 3D element only increases that aspect of the game play, and it is absolutely amazing, especially if you played older games.  It is a fun new way to see the Chibi-Robo in all his cuteness and glory.  I am still so impressed with the 3D aspect of the new "gameboys," as I call them to my son's confusion, and with each game they release I just feel they are getting better and better at utilizing that particular aspect of the portable console.  The characters within the world are bubbly and vibrant as well.  They add to the game while fitting into the generally light and fun environment of the world's environment.
Wait there is more!  As all of you Nintendo fans know Amiibos are really taking over the scene as collectible playable figures, and yes there is an absolutely adorable one that you can buy with the game for the 3DS.  This is by far the best Amiibo inclusion in a 3DS system game.  Save your Chibi-Robo's progress in the Amiibo itself, upgrading your figure as you move on through the game, then use the figure to turn our hero into Super Chibi-Robo (one time in a 24 hour period). You can also use him to unlock the Toy Capsule Gumball Machine for more collectible fun.  You can even use your other Amiibo characters to unlock other toys in the Gumball Machine.  Personally I feel they did a great job getting the Amiibo off the shelf and into the game, although I do put mine back proudly on my wall of toys after I am done with the game.
So what is our overall opinion of this game?  I have to say, in the words of X," Awesome, We love platform games, love the graphics and the soundtrack is totally catchy but not in a bad way."  It actually increases the enjoy-ability of the game itself, and I feel like in other reviews the music of the game was totally overlooked, so I wanted to point it out.   Music can either make or break a game, so this is a win in itself.  Great for all levels of gamers- if you have a five year old that likes to play platforms then they will LOVE this game.  Finding the different varieties of Candy alone has them going crazy, but then having you try and find that candy for them in real life will drive you crazy :).  I loved this revamped version of an old classic and I really feel that the new generation of gamers will fall in love with this awesome, although not really known Nintendo Character.  It has great replay value, and for ten dollars more you get the Amiibo figure with the game as an amazing deal.  Five Stars all around the board- I really think you will all enjoy it.

Pros:
Great Graphics
Enjoyabopinionsare
Unique game play that makes it more than just another platform game
Chibi-Robo is adorable
Amiibo integration is great
Game play varies and does not get boring

Cons:
Not in love with the level movement- however my son disagrees with me and says it is great- so I guess take this as you will
Candy- your child will have you scowling the internet for the candy they find in the game- yea it will be a problem.. Your husband may get in on this as well- I'm just saying I love Amazon Prime
*** We received this game for review but our opinions are our own
Posted by Maureen Jenny Aucone