Set your  DVRS Folks- Me thinks this one will be a hit with the kiddos! 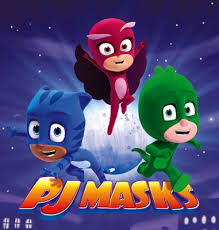 "PJ Masks follows the thrilling night time adventures of three young friends who transform into their dynamic super hero alter egos, Catboy, Owlette and Gekko, when they put their pyjamas on at night and activate their animal amulets. Together they embark on action packed capers, solving mysteries and learning valuable lessons along the way.

TV broadcast premiere on Disney Channel and Disney Junior in the U.S. on September 18,

The premiere season of the colorful and inventive new CGI-animated series from Entertainment One features 52 eleven-minute episodes that follow 6-year-old Connor, Amaya and Greg, who transform into their dynamic superhero alter egos, Catboy, Owlette and Gekko, when they put on their pajamas at night and activate their special animal amulets. Together the three friends embark on action-packed capers, solving mysteries, having thrilling nighttime adventures and learning valuable life lessons all along the way.

With its distinctive look and laudable mission of helping kids discover their own unique “inner superhero,” PJ Masks has all the right stuff to empower preschoolers and be a real hit with today’s families. Young viewers will love the show’s courageous, instantly-endearing characters combined with its focus on adventure and discovery. Parents and caregivers will appreciate PJ Masks’ emphasis on the importance of friendship and teamwork along with imaginative play and creative problem-solving the PJ Masks way – without the “kapows” and “thwacks” found in older superhero shows!

PJ Masks is produced by eOne, the company behind the worldwide hit Peppa Pig, and Frog Box in collaboration with the award-winning French animation studio TeamTO, along with Disney Junior and France 5. The uniqueshow is based on French author Romuald Racioppo’s imaginative and striking picture book series “Les Pyjamasques.” A much-loved publishing property in its native France, where the books debuted in 2008, the series currently includes 15 titles with plans for two new releases every year.

"LONDON, 2nd September 2015: Entertainment One Family (eOne) is proud to announce that its innovative new CGI animated series, PJ Masks, will receive its broadcast debut on Disney Channel and Disney Junior in the U.S. on FRIDAY, SEPTEMBER 18 and France 5 in France later this fall.

PJ Masks is produced by eOne and Frog Box, in collaboration with the award-winning French animation studio TeamTO, and with Disney Junior and France 5. The series is based on French author Romuald Racioppo’s imaginative and striking picture book series ‘Les Pyjamasques’. A much loved publishing property in its native France, where books debuted in 2008, 15 titles have been published in the country to date with plans to release two new titles every year.

“Our new landmark property, PJ Masks, brings popular superhero themes to a preschool audience and we’re incredibly excited about the upcoming premiere on Disney Junior and France 5,” says Olivier Dumont, Managing Director of eOne Family. “PJ Masks is a winning combination – both pre-school boys and girls will love and be empowered by the show’s heroic and fantasy based storylines whilst being able to relate to the central themes of friendship and teamwork.”

Hélène Etzi, Senior Vice President General Manager, Disney Channels EMEA comments: “I’m always incredibly impressed with the breadth of creative talent across Europe, including my home country of France.  From the moment that Frog Box first pitched Romuald's book to us in our Paris office, we knew that a PJ Masks series could deliver a new kind of age-appropriate super-hero adventure with great characters, universal themes, and sharp storylines that would strike a chord with pre-schoolers and their parents around the world.  Helping to bring this series to life in collaboration with Frog Box, leading independent, eOne, and top animation studio, TeamTO, underlines our commitment to creating and sourcing the very best content for kids that not only works on a local level, but a global basis too, no matter where the ideas and stories are created.”

eOne handles global distribution and licensing for the show, which brings a new band of  super hero characters to the world of preschool entertainment. A full-scale global consumer products program will be led by eOne Licensing to complement the series.

Olivier Dumont adds “This property exemplifies what we’re really trying to do with our overall offering. We’re creating highly sought-after original content with global multi-platform potential. Our long-term strategy is to build a robust portfolio with exciting marketing prospects for boys and girls in each key age group and strong digital and ancillary avenues to maximize our already prolific licensing infrastructure. The licensing program for PJ Masks will skew slightly more towards boys, which perfectly complements the girl skewing licensing program for Peppa Pig. ”

About Entertainment One
Entertainment One Ltd. (LSE:ETO) is a leading international entertainment company that specializes in the acquisition, production and distribution of film and television content.  The company’s comprehensive network extends around the globe including Canada, the U.S., the UK, Ireland, Spain, Benelux, France, Germany, Scandinavia, Australia, New Zealand, South Africa and South Korea.  Through established Film and Television divisions, the company provides extensive expertise in film distribution, television and music production, family programming, merchandising and licensing, and digital content. Its current rights library is exploited across all media formats and includes more than 40,000 film and television titles, 4,500 hours of television programming and 45,000 music tracks
Posted by Maureen Jenny Aucone