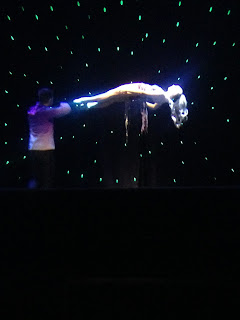 We were invited to Six Flags Great Adventure to experience the Brad Ross Magic Show- which will be performing for a limited time.  Brad Ross is an up and coming magician working the circuit and appearing now at Six Flags Great Adventure in NJ.  His show is a take on a biography of his life and how he came to be a magician, with flashbacks of how he acted when he was young, the mistakes he made as well as the fun!  One of the most touching parts of the show was when he talked about fireflies.  How when you are younger you go around trying to catch them, but as the years go by you stop chasing after them. He reminds the audience to never stop chasing fireflies no matter how old you get, and then his assistants go into a beautiful dance sequence which ends with a lovely shadow box act.  With music playing in the background, shadows imitate his every movement in a seemingly empty shadow box.  Then out of nowhere a silhouette of a women's face appears which is followed by her breaking through the paper and out of the tiny box and onto the stage!  This was a very moving and beautiful performance I will not soon forget. 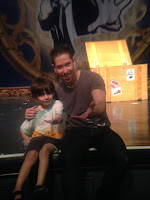 One of his last tricks was when a reoccurring character of his act, the "old magician" who does not want to change the way you do magical acts,  joins forces with Brad and both preformed the saw a lady in half trick--but with a twist. At the end of the trick they mix and matched the lower parts of the ladies, giving the women the wrong set of legs in the end! How rude! LOL.
It was a fantastic show but to be honest I think that no matter what Brad Ross did on stage, he would of won the crowd over.  His charismatic way of speaking, his connection to the audience and the love you see in what he does is what makes him so magical.
So I will end this review with one of my favorite things that Brad said:

"There is plenty of magic in the world, you just need to open your eyes."
Thank you Six Flags for hosting us!
For More Information at Six Flags Great Adventure check out their official website!