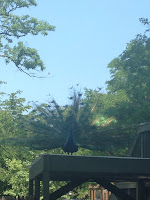 New York is home to many wondrous things.  Buildings that touch the sky, museums that rival any other in the world,let alone the country.  This state is both industrial and full of forests and beaches, at the same time a complete contradiction and completely amazing.
The Bronx Zoo is just one of the amazing historical sites and featured attractions that we as New Yorkers may take for granted. It may not be our fault though since the institute has been open to the
public since Nov 8th 1899.  Back then it housed 22 exhibits and 843 animals.  Fast forward to today where it houses approximately 6000 animals and  features 650 species from around the world, making it the largest of its kind in our country and one of the largest in the world.  Think about that for a moment.  This amazing spectacle is a hidden gem right in the middle of the Bronx. 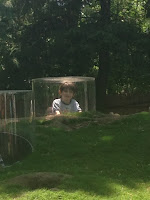 We were recently invited to the grand re-opening of the children's zoo that is apart of the Bronx Zoo estate and it just reminded me of what an amazing facility it is.  I have fond memories of that particular area from my own childhood and was happily surprised that even though it has been updated, that those revisions did not touch the small details that made it so
special back then.  The Bronx Zoo knows that you do not mess with perfection--you just update it a little. 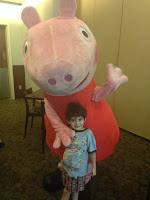 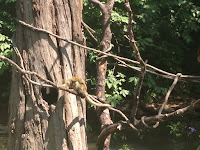 Since opening its doors in 1945, the Children's Zoo has been a must see and with the new improvements that hasn't changed.  Featured throughout the exhibit are pieces of animal-inspired art by author and illustrator Brendan Wenzel that adds a bit of whimsy to the descriptions of the species, along with information about conservation needs.
"Species new to the Children’s Zoo include giant anteaters (Myrmecophaga tridactyla), Linne’s Two-Toed Sloth (Choloepus didactylus), South American Coatimundi (Nasua nasua) and the world’s smallest deer: the Pudu (Pudu puda)." These tiny little deer are by far the cutest creatures I have ever seen! 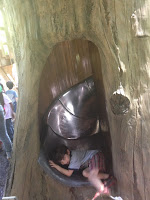 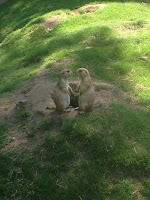 The South American squirrel monkeys (Saimiri sciureus) now live on an island habitat surrounded by wading Caribbean flamingos (Phoenicopterus ruber) and other dazzling waterfowl. They all hop about completely free of restraints.  During our visit moms were carrying around their babies and enjoying their new home to the fullest. 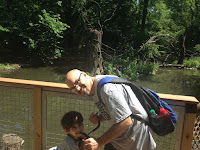 The iconic aviary, prairie dog tunnels, bird nests, turtle shells, and tree house slide are still there to my complete relief for future generations to enjoy and share with their children.  Of course the zoo has many other features to entice you including camel rides, 4D movies, the ever popular monkey house and more!  Open all summer long come on down and relieve a part of your childhood with your own kids.  And if you start to feel old just know that the zoo is now celebrating its 120th year--she is old but boy does she look swell!
WCS worked with author/ artist Brendan Wenzel on the new whimsically illustrated interpretive graphics that identify species, provide key facts about the animals, and educate about the species’ conservation needs in the wild. number

For more information about the Bronx Zoo including full details on what they have to offer and prices please visit the official website. The Mommy's Guide received free tickets to the event for a review- however if we did not like it we would not write about it
Posted by Maureen Jenny Aucone