Anki Overdrive:: the Battle Racing Supercars Are Coming To Stores This Fall! 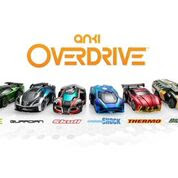 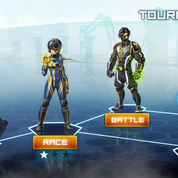 Follow-Up to 2014’s Holiday Hit Introduces All-New Robotic and Artificially Intelligent Battle- Racing Gameplay with Advanced Modular Track Design SAN FRANCISCO – July 2, 2015 – Anki, the robotics and artificial intelligence company that created the cutting-edge battle-racing game Anki DRIVE, continues its revolution in the world of play this holiday. The company today announced Anki OVERDRIVE will start shipping to select retailers on September 20, 2015 in the U.S., U.K., Germany and Canada. It will also be available for purchase on www.anki.com. Utilizing the power of robotics, Anki is able to blend the best of toys and video games into a one-of-a-kind entertainment experience to create the next must-have hit of the season. Anki OVERDRIVE is battle-racing at its best where players control physical supercars via handheld mobile devices to compete against friends, family or AI commanders. The game introduces an innovative magnetic modular track system that allows gamers to custom build their own battlefields within seconds. The game features a rich, in-depth campaign where players challenge a diverse cast of 25+ elite commanders to become champion of the Anki OVERDRIVE Tournament. New game modes such as Time Trial and King of the Hill expand on the popular Battle and Race modes returning from Anki DRIVE. In Time Trial, players find the perfect path to beat the clock, and 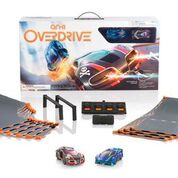 King of the Hill is chaotic fun as players battle for the crown to see
who rules the road by holding the lead position the longest. “Anki DRIVE was an unprecedented success – not only because it sold out early last holiday season due to overwhelmingly high demand, but because it represented an original concept in entertainment. We were able to introduce a completely new play experience that blended the best of video games, toys and robotics in a unique and entertaining way,” said Boris Sofman, Anki founder and CEO. “We’re proud to be at the forefront of a tech movement helping to push the toy industry forward and we are very grateful for all the support our fans have shown us. Anki OVERDRIVE is the next evolution in robotic gameplay, giving players the ability to create a more customized battle-race experience.” Players in Anki OVERDRIVE control a variety of highly detailed robotic supercars on tracks they’ve assembled in their own living room. The supercars are customizable with hundreds of new virtual weapons, upgrades and special items for all-out vehicular mayhem. Cutting-edge AI allows the cars to fully control themselves on the tracks and use diverse strategies to fight to the finish. The game supports up to 4 players at once, with any combination of human and AI players. Team Play and Balance Cars settings add even more variety and fun for matchups of experienced and novice players. The six new supercars in Anki OVERDRIVE are created by Hollywood car designer Harald Belker, whose graphically bold vision and style has been seen in futuristic vehicles appearing in such films as Minority Report (2002), TRON: Legacy (2010), and Total Recall (2012). His sleek Anki OVERDRIVE creations are packed with a 50MHZ computer and camera that recognizes player-built courses mapping tracks at 500 data points per second. Cars and Weapons (SKULL and GROUNDSHOCK are included in Starter Kit): · SKULL – The car’s Pirate Core lets it sail across the track at high speed while its cannon rips through enemy hulls. · GROUNDSHOCK – Its PowerStation Core electrifies the track with split-second maneuvering and lightning-fast attacks. Don’t get in its way. · THERMO - Its Magma Core engine is old-school meets future. Using hyper-charged internal combustion, it not only burns up the track, it projects fire at anyone in range. · NUKE - Its Fusion Core can be charged up to unleash ultra-high energy blasts that tear through normal shields. Its cool exterior masks an unstable explosive interior. · GUARDIAN - The car’s Siren Core keeps the pursuit of victory going at full volume. Its piercing sonic attacks go right through armor and cause challengers to lose control. · BIGBANG – This armor-plated heavyweight’s Graviton Core creates massive shockwaves that send foes flying off course. The Anki OVERDRIVE Starter Kit will retail at $150.00 and will come with two supercars and 10 separate modular FlexTrack pieces, allowing gamers to build eight different battle courses. Players will also be able to expand their battlefield by adding expansion pieces to the starter kit to build massive megatracks with endless variations and new gameplay possibilities. Expansion track packs and accessories vary between US $10.00 – $30.00 per pack and expansion robotic supercars retail at $50.00. Starter Kit contents and expansion sets available: · Starter Kit – (2) two robotic supercars – Skull and GroundShock, (4) straight track pieces, (6) 90 degree curved pieces, (2) riser pieces, (1) four-car charger, (1) tire cleaning kit · Corner Kit – (2) 90 degree curved pieces · Speed Kit – (2) straight track pieces · Collision Kit – (1) 4-way intersection piece · Launch Kit – (1) take off piece, (1) landing track and (3) trestle pieces to create the ultimate jump · Rails Kit – (8) guard rails ensure the chaos of battle stays on the tracks · Bank Turn Kit – (4) Race around corners at faster speeds and pull some serious G-forces. · Elevation Kit – (4) riser pieces to elevate the battle field After launch, exciting new game modes and features will be available on a rolling basis at no additional cost. Anki OVERDRIVE is also backwards-compatible.
Owners of the original Anki DRIVE will be able to download the Anki OVERDRIVE app for free and use Anki DRIVE cars and tracks in specific modes of Anki OVERDRIVE. Keep up with the latest Anki news and join the conversation at http://www.facebook.com/anki or follow us on Instagram at http://instagram.com/anki and Twitter at www.twitter.com/anki (@anki / #ankiOVERDRIVE). ### About Anki Named one of the Top 50 Most Innovative Companies by Fast Company, Anki is dedicated to bringing consumer robotics into everyday life, building on decades of scientific research to make artificial intelligence accessible to everyone. Founded in 2010 by Carnegie Mellon Robotics Institute graduates, Anki creates consumer experiences using technology that once was confined to robotics labs and research institutes. Its first product, Anki DRIVE, is now on sale in the United States, Canada and the UK."
Posted by Maureen Jenny Aucone