It is a fact universally known that everyone LOVES the Minions. I have not met one person that has not had a smile plastered on their face when I have uttered the word Minion. NOT ONE! So I know that everyone will be just as excited as I am to see the new Minion MOOOOVIE, coming this June.
"The story of Universal Pictures and Illumination Entertainment’s Minions begins at the dawn of time. Starting as single-celled yellow organisms, Minions evolve through the ages, perpetually serving the most despicable of masters. Continuously unsuccessful at keeping these masters—from T. Rex to Napoleon—the Minions find themselves without someone to serve and fall into a deep depression.
But one Minion named Kevin has a plan, and he—alongside teenage rebel Stuart and lovable little Bob—ventures out into the world to find a new evil boss for his brethren to follow. "

Today we got a sneak peak at the movie as well as the amazing Minion toys that are coming with its release.  You think the Minions make you smile now, wait till you see this new movie. It is going to be great, add that to the new toys they have lined up and you will have an everlasting grin!

From Hasbro board games- like Minion Operation, to spinning Minion tops, and Mega Bloks, these toys will have you laughing and playing all year long. 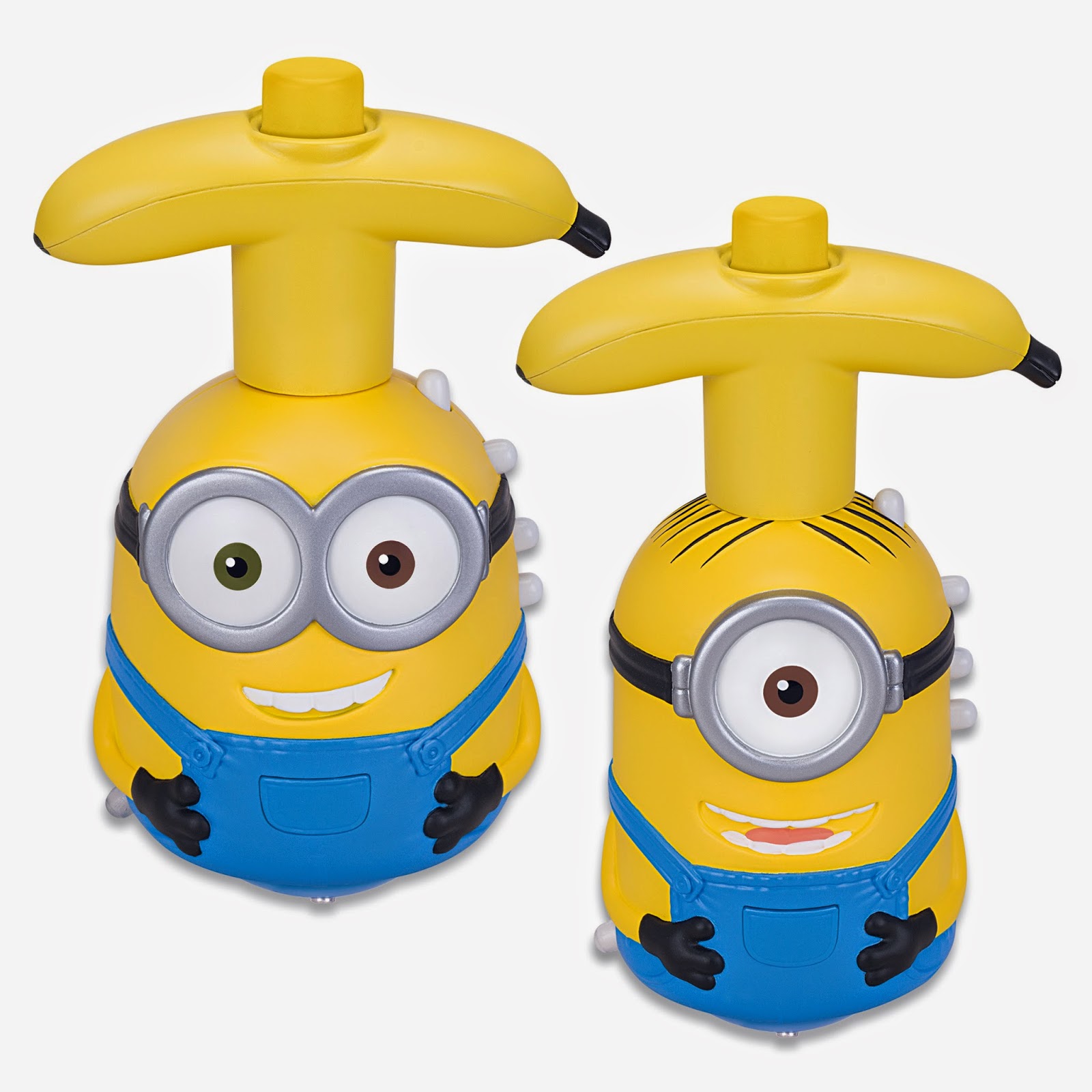 SPINNIN’ MINIONS.  I mention these first not only because they are fun, but because of the reaction I witnessed first hand at the event.  There were two of these bad boys on the play table they had set up for the kids, and the kids lined up to play with them. This is essentially a top in Minion form that lights up.  Showing us yet
again that toys that have lasted decades, do so for a reason- they are awesome. You attach the banana shaped launcher,crank them up and release for a flawless spinning reaction every time. These Bob and Stuart shaped tops spin with flashing lights, original voices, and music. For an added bonus, when you are not making them spin, you can press the talk button for some really funny sounds!  Your kids will want this- so plan accordingly! 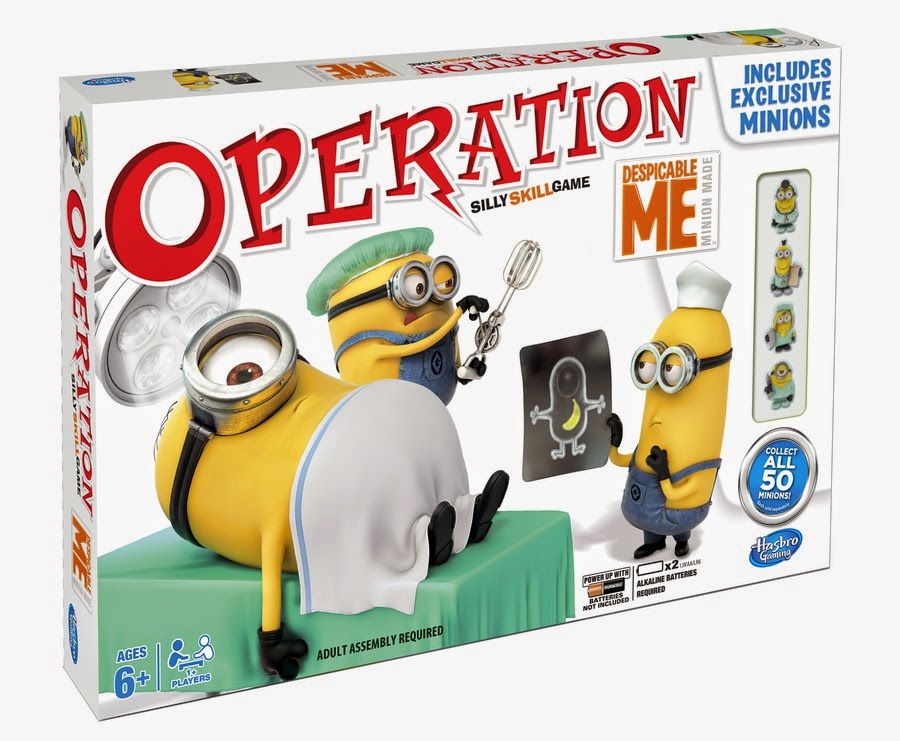 I would not forgive myself if I did not pay special attention to the  Minion operation game from Hasbro coming January 2015. Yes I know it is a long time to wait, but for a timeless game like Operation, we know it is worth the wait!  Stuart is having a bad day, and it is your job to help! Remove items like unicorn fluff, toxic tongue  and nutty noggin.  This will be a great game for game night (which I hope you all have) and will cause a case of the serious giggles!

Mega Bloks are going to come out with a slew of amazing play-sets that you and your child will have a blast building, from crazy dinos and an amazing castle to smaller sets like the flying hot dog stand. You can even build your own Minion! We here LOVE Mega Bloks; they are great for younger kids (it is gauged for ages 5 and up, but my four year old can follow the instructions and loves all the sets!) as well as the older ones.  With the variety of sets that are going to be available you will find the perfect fit for your family! 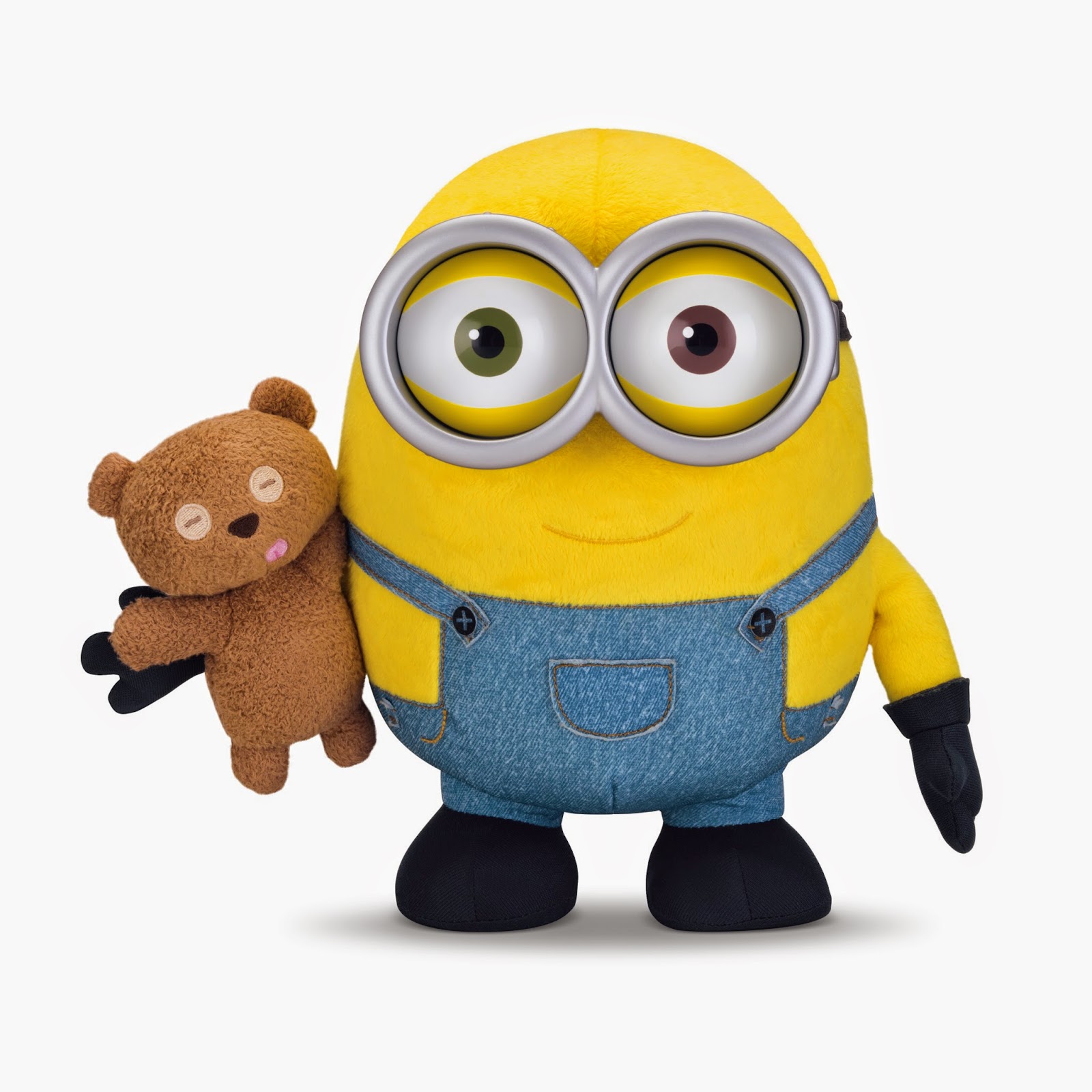 There will be scores of adorable plushes for your kids to oooh and ahhh at (and let's face it, even the adults cannot help but love them as well)- but I have my favorite from the line. Minion Bob with Teddy Bear has my heart!   He is super soft and cuddly- even his goggles are soft, plus he has amazing features!  Bob responds when you hug him, his cheeks glow red , as does his Teddy Bear giving him an adorable innocent look that makes you want to squeeze him more!  Voice activation happens when you squeeze Bobs hand and stomach, plus sounds even happen when you squeeze his teddy bears tummy!  He is just so darn cute, I want him for myself!

There will be tons of figures, blind bags and Play 'Doh sets as well.  You and your family will have a hard time deciding what to buy- but now you have fair warning of what's to come! Choose wisely my friends; The Minions are coming!