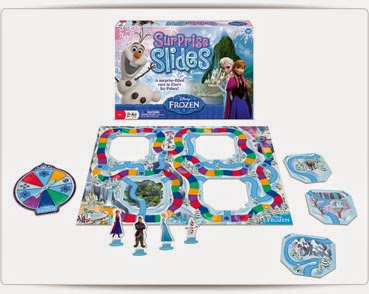 Wonder Forge is known for making great brand related games for all ages.  With Frozen being one of the most wanted out there right now they have hit a slam dunk already by just releasing a game with the beloved characters.  But what makes this game better than others produced by other companies is the game itself.  For ages three and up the game play is great for beginners and seasoned tabletop game players alike.   The kids will love being immersed in the Frozen world, play as their favorite characters, and slip and slide around the board!

With your favorite characters acting as your tokens, play as Princess Anna, Elsa, Kristoff, or Olaf as you get around Marshmallow the snow monster,  trek up mountain peaks and frozen forests to get to your final destination.  Included in the game are four double sided slide tiles that have pre-determined places on the board.  These tiles however can be switched from place to place, and be turned around and switched during the game play and those actions will either speed you up to the finish line or set you back.  The included spinner tells you where your next move lies, whether it be to the next colored tile or the next slide location.  They can also lead to your having to flip over the slide tile, or mixing them up, changing the game play each and every time that you play.

A GREAT way to introduce your pre-preschoolers to tabletop games, it teaches the children how to take turns, and do not single them out because they cannot yet count but are learning or have learned their colors.
Posted by Maureen Jenny Aucone