There are countless apps available that help your child to learn math. Some of them are great, others not so much, but none of them are Tiggly.  The Tiggly learning system combines a physical "toy" with beautifully designed apps. Now you may be thinking "does an app really need physical objects to play it"?  The technical answer is no.  The games are free to download and play  even without the pieces you can play- but your child is missing out. 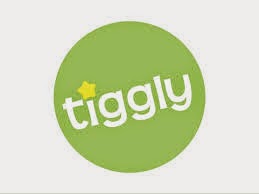 For the sake of this review we played all three of the Tiggly games with and without the pieces.  Without the pieces the apps are still fun well made learning apps- however they are just tapping the screen a number of times to count up to the number asked.  There is no real challenge or comprehensive thinking- heck they don't even need to count they can just tap the screen a million times until they get the right number. Fun for about one second and one go around with the game.
With the brightly colored number spaced rods, the wheels in your child's brain starts to turn.  In my son's favorite game, Tiggly Chef, this hot headed culinary genius needs a certain amount of ingredients to make his culinary masterpieces!  It's your child's job to not only make sure that they add the right ingredients- but the right number of the item as well. Rods in hand my son hears Chef say "add eight shrimp" he swipes the screen until he sees the shrimp appear and by sights knows if it is four or eight on the screen- he usually gets it right too, smart little bugger.  Then he will choose which numbered
rod will work with a trial and error system.  He knows that the biggest one is the red rod with five squares so he places it securely on the screen usually on the ingredients themselves. Now there are three left and decisions have to be made.  He picks up the one square and puts it on the screen three times- counting out 1,2,3.  The shrimp are now all in the pot.  The chef says five plus three equals eight!  My son then says five plus three equal eight! Puts the five rod and the three rod together on the floor and counts out the eight squares- we are now on the next ingredient.

This is exactly how my son interacted with the app once he got the lay of the land down.  The chef app is his favorite because he says silly things, gets mad like mommy when he doesn't listen, and in the end a funny "edible" creation is created and my son gets to record his thoughts on the piece- usually his interpretation of the Mario Bros. "Mamma Mia!"
There are two other apps so far that also interact with the numbered rods- the first being Tiggly Adventure.  This follows the adorable green Tiggly mascot on his journey to his friend's house.  You use the rods to put together the broken walkway- sometimes counting in twos or fives to get the path securely laid down and the green guy safely on the other side. You also have to create ladders to climb over obstacle walls and blast off in a rocket ship.  The graphics in this app are my favorite- it has a homemade material look to it akin to that of Kirby yarn- which I loved.  It is easy to use yet makes your kid think of different ways of getting across the path.  Watching my son whispering to himself "do I use the one ten times or do I use the five and the five" made me instantly think he was a genius (hey we all knew he was) but on a more realistic level made me understand that the Tiggly system really does work. 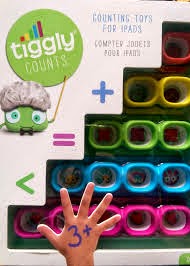 The third app we played with was actually one we had downloaded before we even got the rods for review.  Again it is in that raw material/ up cycled material that we enjoy visually- but in this app you place the numbered rod on the screen- drag the coordinating numbered balls into a line and then some sort of animation happens.  For example you put on the one rod securely on the screen- the app says "one" one dot appears- you drag it onto the line space provided and a worm pops up then a piece of  cardboard turns into a bird and that early riser catches him! Very simplistic, very fun.
Tiggly really does make a difference in the way you interact with your app and the learning experience that comes along with it, really giving your child a fun and interactive experience with the game while teaching them comprehension skills.  I was genuinely surprised at how much I really loved this technology as well as the rapid results I saw when my son played with them.  Over three weeks after we ripped open the box he still empties out the bag of toys and pulls up the app.  The replay value is high because you change the way you interact with the game and it changes with you.
They will no doubt bring more apps into creation as they did with the Tiggly shapes and that will be exciting for both the kids and adults.  This is absolutely one of my top picks for this holiday season and it will be great fun even after the holidays are over.  Sneak some education into the treats why don't cha!  This is Mommy Guide approved!!
Posted by Maureen Jenny Aucone