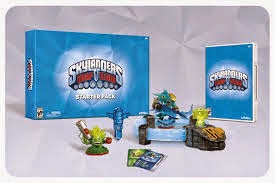 Oh Kaos, that dirty little rascal is at it again!  Continuing his  ongoing "quest" to rule over the Skylands, he happens upon the Cloudcracker Prison.  With a whole bunch of bad guys stored away, and with Kaos trying to build an army, he decides to blow it up and free all the villains that were once safely kept behind the Traptanium built fortress' walls.   Now free to roam around and cause havoc it is up to the Portal Masters to recapture all of the escaped bad guys!  But HOW?  That is exactly what makes Trap Team so unique!   In the game the shards of Traptanium that blew apart from the once together prison fall onto earth,  Portal Masters must use these color-coded shards to "capture" the villains in the game.  Once trapped in the physical shard they are pulled out of the Skylander realm and brought into the real world--but the fun doesn't stop there.  Portal Masters can then place them into the portal and bring them back into the game and make them fight the good fight!

This is by far one the best games in the franchise yet, but if you haven't played the game before let me introduce you.  Skylanders was the first to develop the toy to game franchise.  You are the Portal Master, entering the world of the Skylanders through the toys you zap in.  In this bright and funny world you are fighting against the evil Kaos who wants to rule all of Skyland.  Great dialog, along with active game play gives the player a great RPG/action game that the whole family can enjoy. 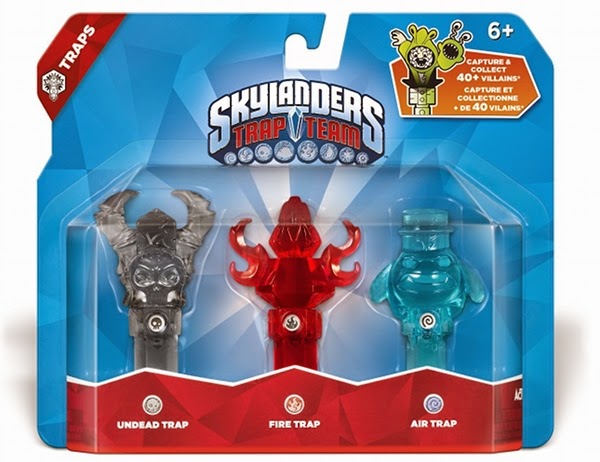 Activision still has the ability to keep the Skylanders game experience magical.  The ability to trap the villains may seem like the main attraction, and it is a big part of the appeal, but the even better story line keeps you playing.  With a little more than 11 hours of actual game play (not including the tower defense mode or arena mode, which I love) you will have game-play with clear and definitive quests on each level and you are more likely to stay on course and reach your objective then ever before.   The world is just as beautiful, if not more so in this new game, with detailed surroundings, a great soundtrack complete with  fun and engaging cut scenes.  Everything about this new game will have you immersed in the world as well as chuckling at some of the one-liners. The game play itself is still a mix with both puzzle and battle challenges.  Then there are the Bosses.  The fact that you not only beat them in the game, but can also transport them from the Sklylander world into the crystal trap gives you a sense of true accomplishment, and some laughs.  Each villain is a unique personality and as they are sucked out from the Skylander world and trapped in the crystal shard in the physical portal, you actually hear them talk outside of the game from the speaker in the portal.  The things they have to say are pretty hysterical.
You can use your Skylanders from Trap Team, as well as the  Minis (or Sidekicks) from other games.  Still an elemental world, the  villians you catch are also designed by the elements so you will need to stock up on the elemental color-coded Traps.  Your now trapped Villain will be playable for a limited time after you catch them and will upgrade automatically when they complete their challenges, upgrading them cosmetically as well as power-wise.  However not all Villains are given their own challenges so these upgrades are limited.  Everything you do as a Villain from collecting treasure to coins all go to the Skylanders, which helps immensely with upgrading your characters.   They all have their own unique abilities as well as background music and personalities.  The one thing that is a big change is that you now need a Trap Master Character to open and enter elemental gates instead of being able to use any matching elemental character.  So you will need to invest in at least one Trap Master character of each element to get into the secured bonus areas.
This may be one of the best games in the series and many feel--and I have to agree--that it is because that Toys For Bob was once again in creative control of the game.  With the enhanced environment, immerse game play, the new trapping ability and the fact that you can fully reuse your characters from previous games I believe that this will be the must have game for the holiday season, If your little one is a fan, do not wait for last minute shopping.  Pick up your game, your crystals and your Trap Masters now, before they are gone from the shelves this holiday season.

Sklyanders Trap Team is available at Target and Toys 'R Us

*We were given a review copy, but all opinions are our own.