Meet MIP, the one of a kind balancing robot that will amaze you.  Made by WowWee this robot is one of those toys that you know your kid will love, but you really kind of want to play with it too.  I broke MIP out of the box about ten minutes after my son went to sleep and that's exactly what we did.  Call me cold but when a robot gets mailed to me I call dibs. 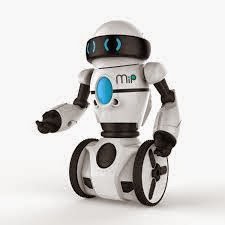 Once you break this little guy out of his snazzy looking box you have seven ways to play.  By turning his wheel you scroll through seven different modes, all colored coded and easily obtained. Roam is when you let the guy just move around in his surroundings. He is pretty fun to watch, more so when you see how he gets himself out of pickles- including attacking cats and annoyingly stationary sofas.  Tricks is where MIP memorizes your own hand gestures to preform a task like spinning, going back and forth etc etc- he can learn up to 50 tricks.  Cage is pretty fun too. With cage you block him and when he gets around the obstacle he does this "oh yeah" sound and spins around.  Speaking of spinning his dance mode is awesome!  Play a song and this little guys goes down to boogey town.  Track is when MIP follows you around the house making some fun noises along the way. The one mode that really makes him stand out is stack. MIP comes with a tray and can carry his own weight in objects. This is pretty amazing, I mean can you carry your own weight?  Nope I didn't think so!  And on two wheels may I add- I can hardly stand on my own two feet!

What made this a hit with me however was the app that you can download for free on any iOS or Android device.  This nifty little app makes playing with Mip such a pleasure.  Once you download the app you easily connect it to your MIP and hellllo fun!  You can control MIP with joystick like controls sending him zooming around the house with ease. There is a dance mode where you play music from your phone library and MIP dances along.  There is also a stacking game where you really get to utilize his stacking feature, seeing how much you can get your little guy to carry before he tumbles down and beating your last best score. 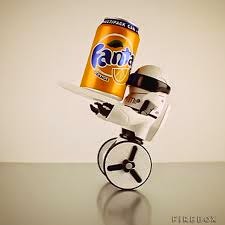 MIP which stands for Motion Inverted Pendulum-seems like a very simple robot but is in fact a highly intelligent piece of machinery.  Besides the amazing two wheel action MIP has an immersive personality- meaning that he responds positively to positive reinforcement and negatively to negative.  Praise this little guy and see the cuteness.  Mess with him and see his tiny little wrath.  His motion censors are also highly advanced and he avoids obstacles better than I do.  He has plenty of room to grow with the advancement of app games.  When I saw this guy I instantly thought of my cousin
(who is now going to be 21 years old) when he was about my son's age.  I remember him getting these robot toys for Christmas that had nothing on MIP and him getting so incredibly excited. He would play with it, know everything it did and show it off like he invented it.  When I show him MIP he is going to instantly turn into that child again.  I know when I show it to my actual child I will again be able to see that crazy excitement that only a toy of this magnitude can bring.  So if your child is a tech geek, this robot is a no brainer to have under your Christmas tree.  He is available at all major department stores and retails for approximately $99.00.  Thank you to the people at WowWee for letting me review this amazing little guy!
Posted by Maureen Jenny Aucone